PARTY IN THE PARK IN PENZANCE 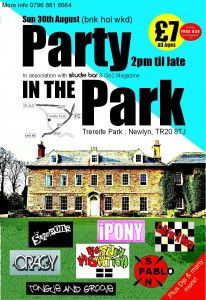 After it’s debut last year, Penzance’s Party in the Park returns to Tereife Park in Newlyn on Sun 29 August. Party In The Park is all about the best local bands playing in front of the best crowd, all under one roof and bands confirmed so far include iPony, Surgeons, San Pablo, Kernow Vibration, The Panicstruck and Gregor and the Martians with many more to be announced.

As this event is held under cover in marquees, the weather can’t mess things up, especially when the site is within the beautiful and historic grounds of Trereife Park. The event runs from 2pm to 12am, is open for all ages and tickets are £7. A free bus service runs from Greenmarket in the centre of Penzance, direct to the party site. More info and tickets at 01736 350984.