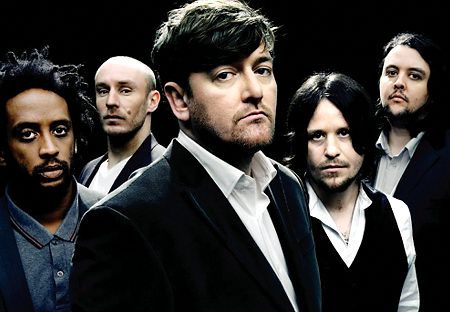 The last twelve months have been particularly good ones for Guy Garvey, Craig Potter, Pete Turner, Mark Potter, and Richard Jupp – otherwise known as indie rock band Elbow. Not only did they have triumphant performances at festivals like Glastonbury and Latitude, a successful UK tour and a North American tour that went down a storm, but the band were finally awarded a Mercury Music Prize for their latest album, ‘The Seldom Seen Kid’ (they were first nominated for the prize back in 2001 for debut album, ‘Asleep In The Back’).
Although a continuous stream of critical acclaim has followed the band for the 19 years they’ve been together, the commercial success that many thought they deserved has eluded them. But last year, the thundering, rock driven sound of single ‘Grounds For Divorce’ was all over TV on adverts and trailers, the sun shone on their epic, goosebump-raising Glasto performance of ‘One Day Like This’, album sales went platinum, and the band received three Brit award nominations for Best Live Act, Best British Band and British Album. Success finally crash-landed in the patient arms of the band, after years of hard work and ups and downs. 247 Magazine caught up with lead vocalist and lyricist Guy Garvey and guitarist and backing vocalist Mark Potter ahead of their tour in March for a chat about sun, success and sticking things out…

It’s been almost two decades since Guy and Mark met at sixth form in Bury, near Manchester in 1990 and together with Pete and Richard formed the band, Mr. Soft. Mark’s brother, Craig, joined up soon after and by 1997 the five-piece were called Elbow and had a deal with Island Records. A rocky career followed, with the band being dropped and then signed with new labels several times. “What doesn’t kill us makes us stronger,” said Mark. “We just pick ourselves up, and nothing really matters other than the fact that the five of us still love being in a room together and making music, and that’s always what it’s always been about, right from the very beginning.” From delicate, beautiful ballads to melancholy stories and pulsing, anthemic rock, the band’s sound is distinctive and steeped with the gravitas that passionate musicians instil in their work. Guy’s lyrics and the rest of the band’s music take you on a journey with each of their four albums telling a different tale – from love to loss, each album designed to be listened to as an album, something that might seem like an outdated concept in today’s single download crazy music industry but that underwrites their dedication to make the music they love. Mark explains, “We’ve already started our next record. In January we made sure we spent some time together and getting in the right frame of mind – playing different music to each other, listening to stuff together, making sure we’re all on the same page. It’s a funny one, because now we feel like for the first time ever, we can write a record that we know people are going to go and buy. We want to do something a bit more rustic, a bit more rough around the edges, a little bit more guitar based and organic. And,” he points out, “We’re never ever going to sit down and try to write a “commercial”, radio friendly single, because we’ll just end up hating it.”

With a solid fan base, and the constant praise of the critics, it seems strange that the band who are now being lauded as one of the UK’s best have been left off the winners lists for so long. Guy pointed out, “There are too many random factors to pin point what happened this year that didn’t happen in previous years. Artistic and financial support from our excellent record label [Fiction] definitely is part of it, but no one could control the sun at Glastonbury or the conclusion that the Mercury panellists came to…” he paused, then laughs. “So I’d like to take the credit, it was me, all me!” Of course, as front man of the band and lyricist, you’d expect Guy to take some credit, but it’s plain as day that he’s not speaking from his ego here – it’s just a lighthearted joke. They talk about themselves as the “longest surviving uncorrupt democracy in history”, and all five members of the band are lifelong friends. Mark adds, in his gentle Mancunian lilt, “We feel very lucky to have somehow shaped this career out of the little noises that we put together. To be able to do that with your best friends, and it take us right round the world, well, we feel dead lucky. I’m sure there have been points where all of us have individually thought, I can’t do this anymore, we’re not getting anywhere, but we’ve all stuck with it.”
Amidst the awards ceremonies and the spiralling album sales, Elbow are forging ahead with new projects. Plans are afoot for a kids animated film at some point in the future, and as they’ve already mentioned, the fifth album is well underway. In March they’re releasing a limited edition box set featuring a new version of The Seldom Seen Kid, recently recorded at Abbey Road with the BBC Concert Orchestra. They are also collaborating with the Manchester based Halle Orchestra (Britain’s oldest orchestra), plan to go out to Australia in April for a few gigs, and their UK tour in March finishes up at Wembley Arena. Mark says excitedly, “I remember one of the first times me and Guy ever met, sitting down and watching Queen Live at Wembley, saying to each other that in a couple of years time that would be us… nineteen years later, we’ve finally made it!” And it couldn’t be more deserved.