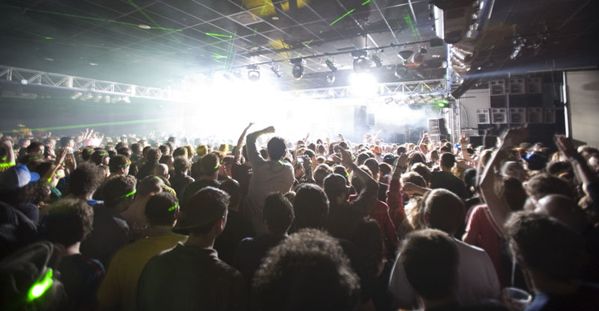 BLOC 2011 touched down in Minehead once again, bringing 6,000 techno and electro heads from all over Europe together for three days of electronic bliss, with a massive line up featuring legendary artists topping the bill such as Aphex Twin, Magnetic Man and LFO all taking to a stage normally reserved for a lame kids pop extravaganza! For a quiet weekend in Spring, North Devon once again found itself gearing up for the thundering bass of the real underground sound, with a perfectly formed line up of new and old, BLOC is an experience that is normally found far beyond our South West borders and a festival that is held in a unique place delivering a mind blowing atmosphere.

Now in its 5th year, BLOC is firmly established as a truly international festival that see’s ravers flock from all over the world to party long into the early hours whilst the residents of Minehead slept. The vibe was electric from the minute we threw our bags on our bunks and headed out, with the Thursday warm up delivering a pre-festival party that matched any club night hands down, getting punters in the mood for the impeding madness about to descend on the sleepy holiday village.

Friday launched the festival into full swing with the opening of the entire complex, it’s six stages, arcades, bars and other random holiday park amusements, all jumping to the background of thumping Funktion One bass erupting from every corner. As Friday worked everyone up into a rampant frenzy, by Saturday, everyone seemed locked into one vibe by the time the headline set from notorious Aphex Twin rocked main stage, bursting at the seams after a flawless build up from the likes of Four Tet and Dopplereffekt.

After recovering from two nights of partying in the luxury of a chalet, Sunday was brought to life with a four hour live show from Laurent Garnier that wrapped the weekend up perfectly by midnight to a crowd that seemed like they had moved in for good at Butlins. BLOC is showing its maturity on how to deliver a wild weekend so early in the party calendar and one that you miss at your peril. If you’re tired of mud, rain and general mess of UK summer festivals, the luxury of staying in a comfy chalet makes the entire experience unique, whatever the weather… which was of course sunny being a holiday park!

Everyone we chatted too we’re friendly and up for it, all plugged into an atmosphere that was electric, with the production being second to none, BLOC is a totally awe-inspiring weekend and we simply can’t explain every amazing set and magical experience in so few words! Summed up perfectly by one punter “I was thinking that BLOC should just be in Butlins forever, like a little village of festival and people that could come and go as they liked, stay for a weekend or stay for a month… a girl can dream!”. Forget yellow coats, this is the way that holiday camps should be run the across the UK all year round!

Tickets for 2012 are sale at the now at www.blocweekend.com… See you all there!!

Here is a little taste of the BLOC weekend, as seen through the eyes of the Mary Ann Hobs Stage – loads of other Bloc footage on the BLOC TV channel at www.youtube.com