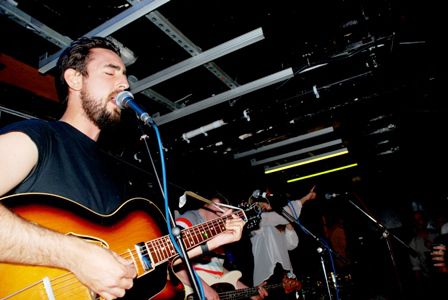 Everybody knows the importance of stage presence. But whilst many bands see this as an invitation to preen; to tell ridiculous anecdotes or get mouthy with the crowd, Slow Club are so grounded it’s a miracle they don’t sink.

Hailing from Sheffield: home of Pulp, Arctic Monkeys and a rather unfortunate history in steel, Slow Club paddle at the edges of mainstream indie-folk. Fortunately for them, Bath was in a whimsical sort of mood, and their Fleet Foxish style was well received by the crowd. Hipsters, folkies; a smattering of hippies and the occasional housewife. The dingy dance floor was packed to the walls, and they bopped to the duo with genuine vigor. If anything, Slow Club seemed surprised by how nice everyone was, never facing boos, trash talking or cat calls, gliding through what proved to be a cozy little set.

Currently signed to Moshi Moshi Records, the pair has two albums to their name, the peppy Yeah So, followed by their most recent addition, Paradise. To a cursory ear, their work seems rather twee. “Hackney Marsh” is a prime example, being a gentle, ukulele-like harmony of tinny strings and saxophones. “If We’re Still Alive” is a different brand of cuteness, mixing Fleet Foxes with an Arctic Monkeys beat, as vocalist Rebecca shifts her voice to a throaty, almost bluesy tone.

Swinging between poppy, ethereal and melodic, Slow Club falls firmly under the Indie label, “the Dog” even making use of those constantly heard, Arcade Fire “woos.” Thankfully, the pair does manage to maintain their identity. Rebecca Taylor, effortlessly glamorous, shows incredible range, moving from husky, to soulful, to a blond, powerhouse of perky pop crooning. Her sound is leant strength by Charles Watson, holding up the harmonies with his own mellow voice. The effect is mesmerising. Even better, it’s deliciously distinctive, giving Slow Club some much needed individuality in what is, let’s face it, an increasingly homogenised genre.

Slow Club is undeniably twee. But that doesn’t mean they don’t have substance. Each song is masterfully constructed, vocals and music blending elegantly in one. On the slow side, there’s “Never Look Back,” Watson’s lounge-like chords lying gently over Rebecca’s quicksilver “oohs,” the similarly low key “Only If You’re Certain,” proving a lyrical bullet right to gut.

Unlike many musical acts, Slow Club isn’t aiming for a spectacle. Their clothes are stylish yet subdued, commanding the stage with kooky bemusement. Sometimes they look like deer in the headlights. Others they seem downright confused. Between playful bickering and a startled, slightly self conscious approach to the audience (“we’re Slow Club. Yeah.”) you’d be forgiven for thinking this was their first time on stage. Is this bad thing? Far from it. In a world of posturing, prima donna songsters, it’s refreshing to see someone real up behind the mike. There’s no fakery here. Just two, genuinely nice people, here to play some music and have a giggle if they can. Rebecca isn’t the sort of person who’d hang around the corner, expecting an encore. Instead she asks for a bathroom break first, striking a “pee for a play,” type of deal. Professional? Probably not. Endearing? Definitely.

Treading in the footsteps of Indie greats, Slow Club may struggle to stand out amongst the crowd. But they have passion. And character. A genuine act, adorable and playful, they brought some joy to the murky Bath dusk, and were worth every penny of the ten quid ticket. All the best, wherever they’re headed.