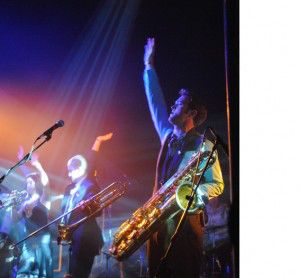 In:Motion returns to Motion skate park in Bristol this autumn with over 30 new artists just added to its 2012 stellar line up, which kicks off on 29 September and concludes with a bang on 1st January at Bristol’s legendary Motion Ramp Park.

The 2012 series offers up over twenty five unique clubbing experiences across three months that collectively feature more than 150 of the worlds most boundary pushing artists, DJ’s, clubbing collectives and promoters.

New artists joining the already heavy weight 2012 bill are 2manydjs with a DJ set who step up on the 13th Octoberalongside a crop of DJ’s at the top of their game, including the formidable Riton, Drums of Death (live), and Daniel Avery, whose Fabric Live mix is due out later this year. The Pardon My French boys host The Tunnel, serving up delicious disco for the Mademoiselles.

Man of the year, and possibly the decade, none other than the infamous Wiley brings the noise to In:Motion on November 2nd – riding high with the tune of the summer “Heatwave” and back on top of his game, his first appearance in Bristol for many years is guaranteed to be a road block.

16th November sees legendary DJ Pete Tong bring his much hyped ‘It’s All Gone Pete Tong!’ party to Bristol. Joining him on the night are long-time collaborators Booka Shade. Consistently topping Resident Advisor polls, the legendary Berlin duo’s performance at one of the first ever In:Motion events in 2010 is widely regarded as one of the best the series has ever seen. Also heading up the bill is Raf Daddy, one half of the mighty 2 Bears, and the sublime DJ coupling Blond:ish. Ewan Pearson, Visionquest’s Laura Jones and Bristol beat-purveyor Bowski are in The Tunnel.

A inimitable Bonfire Night’s celebration comes to In:Motion on 3rd November when Gunpowder Plot take over Motion for an evening of musical mayhem from infamous party starters The Dub Pistols and Smerins Anti-Social Club alongside a crazy crew of mischief makers, Sheelanagig, Dutty Moonshine, JFB, Cheeba and the sublime vocals of Gabby Young & Other Animals, The night will also include a roaring Bonfire, a firework display over the river, hog roast and jaw-dropping circus entertainment provided by some of the finest aerial artists in the UK.

Following on from Bonfire Night, Resident Advisor present a momentous night at In:Motion on Saturday 17th November which reflects the brands global reach with a collection of well-renowned artists from all over the musical map. Stunning sets are guaranteed from Space Dimension Controller, Rustie, Shackleton (live), Blawan, APR101 (live) and Koreless (live). Berlin Techno legend Shed headline the 2nd warehouse. Hosting The Tunnel (AKA the Kellydome) are local boys The Kelly Twins. The main room headliner can now be confirmed as the mighty Sbtrktplaying one of his rare and exclusive DJ sets of this year

With Fat Boy Slim and Annie Mac Presents nights both selling out in record time, Public Enemy are hot on their heels, having re-entered the charts with ‘Harder Then You Think’, the anthem to the recent Paralympics. Other in demand nights such Hessle Audio, Hospital Records and Funk From The Trunk XXL are also selling like gold dust.

The 2012 lineup is the biggest and most diverse yet, exploring all corners of dance music taking place at this iconic Bristol institution. With its network of warehouses and impeccable sound systems, Motion is the perfect setting to enjoy an unparalleled clubbing experience and has become an international destination for dance music lovers.

Combining unparalleled, cutting edge music with a charismatic charm, In:Motion has gained a prodigious reputation for its commitment to underground electronic music.