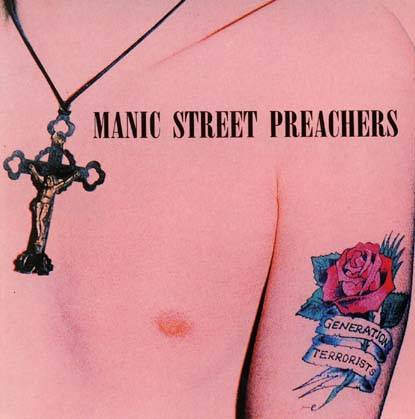 The film coincides with the 20th anniversary release of the ambitious 1992 album. Planned as a magnum opus that would sell sixteen million copies and lead to the band’s dissolution, their Generation Terrorists was wildly ambitious, confused, exciting and utterly unique. It remains the truest distillation of their ever present us-against-the-world strategy.

‘Culture, Alienation, Boredom and Despair’ was originally planned as a DVD extra. It would consist of a short chat about Generation Terrorists between acclaimed filmmaker Kieran Evans (Finisterre, Kelly + Victor), longtime Manics collaborator Robin Turner and James Dean Bradfield, Nicky Wire and Sean Moore in the band’s Cardiff studio. The twenty minutes of planned interview time quickly grew into an afternoon long reminiscence about the Manics’ early years, from Blackwood to Hollywood and all points in between.

Generation Terrorists represents a period of wide-eyed optimism in the Manics’ career – a fact clearly reflected in the warmth of the conversations captured in the film. Covering everything from self-financed singles and pay-to-play gigs through to the emotional resonance of the band’s epochal eighteen track major label funded debut album, Culture, Alienation, Boredom and Despair’s eighty-plus minutes see the Manics and key players such as Bob Stanley (Saint Etienne), Martin Hall (the band’s longtime manager), Steve Brown (Generation Terrorists producer) & James Brown (ex-NME) talk candidly about the band’s early career, their debut album and the circumstances that helped spawn it. These conversations are framed by a rich archive of video and printed material that the filmmakers were granted access to by the band.

The band says: “We’ve a huge amount of respect for what Sŵn Festival does for Cardiff and Wales in general. Over the last five years, they’ve brought hundreds of bands to the city, many of whom may never have found their way here without the enthusiasm and dedication of the people behind Sŵn. We’ve wanted to get involved somehow for a while and – being as we’re currently out of action live wise in the UK – we thought a one-off Welsh screening of the Generation Terrorists film, Culture, Alienation, Boredom and Despair might be a good way of saying thanks to the people behind the festival for what they’ve done for the local music scene.”

The film will be showing at Chapter Arts Centre on Saturday 20 October at 6pm. There will be a limited amount of £2 top-up tickets to the screening, available to Sŵn Festival wristband holders. Tickets will be available to buy in person from Chapter Box Office from midday Thursday 18 October. A wristband or proof of wristband purchase must be shown when purchasing a £2 top-up ticket (max 2 per person) and also on entry to the screening. All proceeds will be donated to Young Promoters Network. General public tickets will also be on sale priced £6 and will be available via Chapter Arts Centre Box Office.

More information on Swn, which takes place from Thursday 18 – Sunday 21 October 2012 at various locations across Cardiff, available at www.swnfest.com