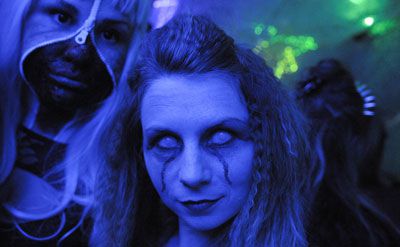 If you visited an infamous Mexican strip club that’s open from dusk ’till dawn, safely navigated a maniac-infested maze and then took a trip in crash-landed a UFO with its own sunken dance floor you would still only have scratched the surface at what must have been Cornwall’s biggest, best and most bonkers Halloween event.

The Masked Ball attracted Halloween revellers from far and wide to the remote Rosuick Organic Farm, St Martin, on The Lizard last weekend for a party like no other. In fact, calling the Masked Ball a ‘party’ is a bit like referring to the Second World Was as ‘a bit of a scrap’. It is an understatement of almost criminal proportions.

As well as the previously mentioned attractions, the epic all-nighter also boasted a Psycho Circus big top marquee, a Tron-themed UV lit dance arena, the uber-cool snow dome that has proved such a hit at the last two balls, a morgue chill out area, a pimped-out hearse with hydraulic suspension, pole dancers, acrobats, stilt walkers and some of the biggest names in the dance scene.

The Ball is a one-night mini-festival, where all the stops are pulled out – and then some more stops are added just so they can be pulled out too. From the minute you arrived on the site and saw the now iconic Hollywood-style Masked Ball sign it was impossible not to be impressed by the ridiculous amount of effort that had been put into what is ‘just’ one night. With so much attention lavished on creating the perfect playground for a night to remember, it would be a travesty if the entertainment failed to live up to stage. Thankfully it didn’t.

The Other Tribe showed just why they are probably the most hyped live act in the country right now with a frenetic performance in the Psycho Circus big top, where they were followed on stage by the legend that is Brandon Block, and then the other big name acts Milo and Herve.  Meanwhile, the fabulous Cuban Brothers were getting down to business (and their underpants) with pole dancers and serpents in the Titty Twister-inspired main room, before Ry Spenceley came along and stirred up a Love Riot of his own. Elsewhere the likes of Lee John, Jac the Disco, Sir Vinyl, Hong Kong Ping Pong, Kevin Godden and NYC Soundsystem, to name just a few, were keeping the party going in the five other venues until 6am.

The entire Masked Ball crew deserve most of the plaudits, for their dedication and devotion to creating what must be one of the very best events of its size and kind to be staged anywhere. And, amazingly, they just keep getting better. As if that isn’t enough, they also do their bit for charity with the event raising £350 towards St Keverne Christmas lights, £350 for Porthleven Christmas lights – which, added to the £350 raised by the summer Masked Ball is enough to light the clock tower – and £1,000 for the Pants Cancer Charity.

Kelvin and the crew, ‘Ballers’ everywhere salute you – and May the Fourth be with you, because that’s when you have to do it all again, this time down in Porthleven, for the Summer Masked Ball. See you there!