INTERVIEW WITH JAC THE DISCO 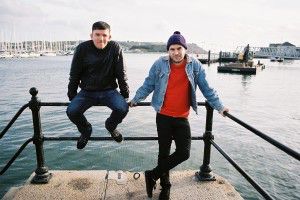 In the deep dark depths of December in 2006, a tiny crowd in Plymouth’s Bac Bar were treated to the very first set from a promising young duo of DJs known as Jac The Disco. Jay Rossi (pictured on the left) and Tom Burns (aka Pac, on the right) were inspired to start DJing because there were no nights in the city playing the sort of music they were into – we’re talking an eclectic collection of everything from electro, to fidget and Baltimore. Originally from Somerset, Pac moved to Plymouth when he was 18 to study architecture, and Jay grew up in Bournemouth but lived in Plymouth for ten years. “We first met when Pac booked me to DJ at a hip hop night he was promoting in Plymouth called Spin Cycle,” Jay told us. “I wanted to start a night playing the kind of music I was into, and Pac told me he was thinking along the same lines and we decided to get some ideas together.” Jac The Disco’s clubnights and boat parties soon became the stuff of legend, and the duo built up a strong following in the South West. Inspired by everything from electro funk to old school hip hop and the 80s and 90s rave scene, Jay and Pac have been burning up the decks and rocking parties all over the place. Three years on, Jay and Pac have progressed from playing in local bars to running their own nights in London, as well as holding down a residency at Cornish clubnight My Heroes Killed Cowboys, and producing their own tunes. They have also just played at the legendary Fabric in London as part of the Filthy Duke’s night, Kill Em All. 247 Magazine caught up with Jac The Disco for a chat about frilly latex shirts, playing at Fabric in London, and flying badgers…

So guys, tell us, what was your first gig like?
Pac: The first gig we played was at Bac Bar on North Hill, Plymouth just over three years ago, to a tiny crowd – although we did have some encouraging comments about the music we were playing even then!

Jay: A tiny crowd? Ha ha, mate! There were about two people there! It was pretty dire probably because the type of music we were playing at the time was pretty unheard of at the clubs and bars in Plymouth.

What are your respective roles within Jac The Disco?
Jay: I always consider Pac to be the technical guy – the one who knows how to use all the software we use – and he’s definitely the rock ‘n’ rolla! I’m the more level headed one, I would say my role tends to be on the promotion and management side of things, handling bookings and press. When it comes to travelling to gigs, I’m the driver and Pac is the navigator. We both have the same taste in music, which I think is why it works so well. We’re both always on the hunt for new and interesting music.

What kind of set up do you use when DJing?
Pac: We use various set ups depending where and how long we’re DJing for. We tend to use a mixture between Serato Live, Tracktor Scratch and CDs. We collect vinyl but rarely use it in our sets due to how heavy it can be lugging it about to gigs.

What kind of atmosphere do you like to create on the dance floor?
Pac: It’ll vary with regards to where we’re playing. The type of venue and crowd really influence what we play. Sometimes we’ll go off on a massive old school disco tip, playing Hi-NRG 70s disco and 80s Italo to create an intense energy, sometimes big room electro to send everyone crazy and occasionally deep Chicago house and techno to create a real solid groove to keep everyone chugging along early into the morning – although realistically our sets are a combination of all of this, and we really try to put across all our influences to the crowd.

What has been your most memorable Jac the Disco gig?
Jay: Wow, most memorable? Well there have been lots of great parties… We used to host our own night in London called Last One In’s A Rotten Egg! We have put the night on hold so that we can spend more time in the studio but we’ve had some great nights. We’ve partied with the likes of Riton, Brodinski, We Have Band, Stopmakingme, and DJedjotronic from Boys Noize. I think the most memorable was when we booked Das Glow and Jean Nipon from Institubes, man that was a crazy party.

Where would you like to be one year from now?
Pac: In a year’s time I’d like to see us continuing to DJ and have some a few of our own productions under our belt.

Jay: Yeah, who knows? Maybe even some live sets.

Are there any tunes that never leave your record box?
Pac: Probably African Love Song by Gepy & Gepy, because it’s a classic disco party song, most people will sing along to it even though they’ve never heard it before!

Jay: Africa! Africaaaaaa! Yeah, great song! As for me, all my tunes are on my laptop so I guess they never leave it. But two tracks that I always have at hand are Aeroplane’s remix of Sebastien Tellier’s Kilometer & Serge Santiago’s Remix of Shit Robot’s Simple Things.

Tell us more about the tunes you’re producing at the moment…
Pac: Very much in the ‘Nu Disco’/Chicago House vein I guess as I think that’s what we’re pretty into at the moment.

If you could collaborate with any musician, who would it be and why?
Jay: It would have to be Daft Punk I think, as I’m half French and could do with brushing up on my lingo and I’m sure Pac would like to hit a few buttons in their pyramid stage.

Pac: Yeah, that would be pretty sweet, although I’d quite like to get into James Murphy of LCD Soundsystem and DFA’s studio, he’s a proper audiophile and technical geek. Anything he produces (or even releases on his label for that matter) just exudes quality that obviously comes from a very talented mind.

What have you got lined up for 2010 – any festival dates booked or new music coming out?
Jay: We’re going to keep the focus on DJing and building on our own productions this year. We have one track already finished and have some others in the pipeline. We are due to make our debut at Fabric, London for the Filthy Dukes night ‘KILL EM ALL’ on 22 January, so we’re really excited about that one. We are also in the process of confirming other bookings for the year, which you will be able to keep up to date with via our myspace page.

Since starting Jac the Disco you’ve both moved from the South West to London. How do the music and club scene compare to each other? Is one better?
Pac: I’d say we can get away with more obscurities in London, but in the South West everyone seems more up for it – people can be a bit harder to get dancing in London, I guess because they tend to be spoilt all the time!

Jay: Obscurities? Are you talking about the latex shirt with frill?

Yikes, latex shirts?! Ahem… So where is your favourite place to DJ in the South West, and why do you like it?

Jay: We always love to come back and DJ in the South West as this is where it all began for us. At present we’re residents at My Heroes Killed Cowboys which is hosted at the Isobar in St Ives, Cornwall. It has a great crowd, solid guests and a good sound system as well as the odd random surprise such as taxidermy cats and flying badgers. I mean, what more could you want? That’s the Cornish for you!

You don’t get much more Cornish than flying badgers in a nightclub! Let’s leave it at that… Do you guys have any shout outs?

Pac: Just big thanks to everyone that’s supported us over the past few years- you know who you are!

Thanks guys. Good luck for the future, and for your gig at Fabric! Check out Jay and Pac’s gig at Kill Em All on Friday 22 January at Fabric in London. For more info on the guys, check out their myspace: www.myspace.com/jacthedisco. They’ll be performing in the South West at My Heroes Killed Cowboys on 13 February at the Sandbar in Praa Sands, Cornwall, and again at My Heroes Killed Cowboys on 10 April at Isobar, St Ives, alongside Foamo.