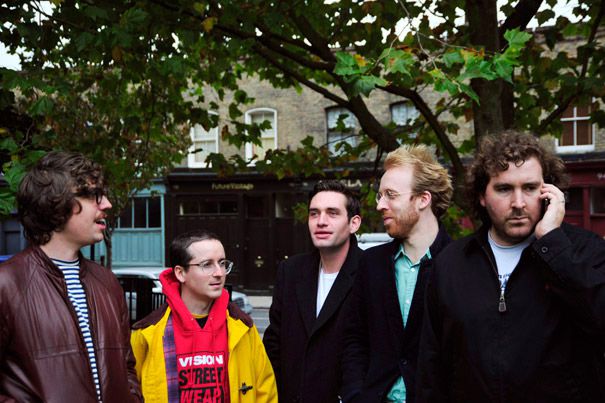 After a year or so locked away in their studio, busily working on a multitude of projects, our favourite electro-dance nerds Hot Chip are back with fourth album, the brilliant ‘One Life Stand’. The Grammy award winning band’s newest record is branded with their trademark intense emotion and off beat, experimental pop aesthetic, and features both the ballads and the dancefloor fillers that we have come to associate with the five-piece band.  They recently “confirmed” that they’ll be playing Glastonbury again this year by telling the press that they’ll be in the Somerset area at the end of June. Before then, you have the chance to catch Joe Goddard, Alexis Taylor, Felix Martin, Al Doyle and Owen Clarke on their UK tour dates as they play Bristol’s O2 Academy on Tuesday 23 February. Get your tickets here.  We caught up with Felix (drums), in Hot Chip HQ, a studio near London Bridge for a chat about life, multi-instrumentalism and having your cake and eating it…

247: One Life Stand has been described as your comeback single. You never really went away though, did you?
F: No, not really. It has been two years since we released an album but we’ve been busy the whole time, we’ve been doing a lot of projects, and we haven’t taken a holiday. We’ve been working on remixes, working with lots of different artists, and it’s been a busy 12 months.

247: You joined the band in 2003 – what did you do before then?
F: I’ve been making music since, well, as early as I can remember. Me and my brother used to make music with some of his friends, experimenting with guitars and tape recorders and things like that. That’s what I can remember doing. Before I joined Hot Chip, I met Alex at university, in a record shop – I was looking for plastic house records, and he came up to me because he thought it was interesting that I was looking for that type of music, we just got chatting and realised that we had a lot in common. It was a few months after that that I joined the band.

247: What’s life like in Hot Chip?
F: If we’re on tour, there’s quite a routine – you get up late and find yourself in a different city, or in a different country sometimes. As we’ve been touring for a few years we kind of know our way around a lot of cities in Europe and America, we’ve got friends all over the world really. There’s quite a lot of time to be social, and go to shops and places that we know. Touring is a lot of fun, but when you get back home it’s quite difficult to figure out exactly what it is you’re meant to be doing with your life when you’re not doing that. It requires quite a lot of energy and takes a lot out of you, so the next couple of months are spend trying to adjust to normal life.

247: Do you spend a lot of time with the band when you’re not touring?
F: I do with Al (guitarist), because I run a studio with him in London, and I live with Owen, so I see him every day pretty much. Alexis has recently had a baby, so we haven’t really seen that much of him this year, he’s been off with his family. The last couple of weeks we’ve been together in rehearsals… We get on really well, we always have done, we’ve always been good friends.

247: You play drums, but what else features in your Hot Chip “job description”?
F: Quite a lot of things really, we can all play most instruments, so it’s not really a problem for me to play guitar or keyboards or whatever is asked for… Although Al’s more of a multi instrumentalist… On the album we just made he was asked to play some brass instruments and the cello and the piano, a whole bunch of things. I’m more technically minded, I’ve got quite a lot of equipment and knowledge about programming synthesisers and producing and stuff like that… So that’s what I kind of get asked to do when we’re recording and when we’re playing live and stuff like that.

247: What would you say you bring to the table in terms of your likes and dislikes, or the influences you have…
F: It’s kind of changed over the years really, when I first joined the band, I used to play a particular kind of drum machine called an MPC, which you play by hand, by hitting pads and making electronic sounds, and I think that that kind of appealed to Alexis and Joe because its quite a raw, almost hip hop thing to do, that you’ve got someone manually playing things like electronic handclaps and snares… So maybe that was some influence I had early on in the band. As things went on, I suppose I got more into house and techno music, and I brought more of that into programming some of the drums for the band, and helped have an influence on the more dancey side of the band, which is more relevant to our live act than it is to our records really, cos our records are pop records, but when we play live we transform our music so it’s more dancey.

247: We’ve seen you rock your live set at Glastonbury, with Wiley…
F: That was really good, because I’ve been going there since I was a teenager, and I’ve had loads of really fun times there, and it was kind of magical to be on the stage, and have such a wicked crowd, and when I’d seen the Beta Band, I think on that stage something like five years before, and it was a really good experience. I felt really happy that we managed to hopefully create the same kind of moment for all the people who were watching. We were up against Amy Winehouse on the main stage, so I was surprised that we got such a big crowd as we did.

247: Did you ever expect to be up on that stage performing one day?
F: Not really, I didn’t really have the ambition to do it, but I’ve just been carried along by Joe and Alexis, and their self belief and skill in writing songs that people like, basically.

247: You’ve got a tour coming up for the new album – are you looking forward to hitting the road again?
F: Yeah, I’m excited. We’ve been rehearsing, and the new songs are starting to sound really good. I think the new album has got a lot of songs on it which are going to be quite immediate, which people are going to enjoy hearing live. I’m really excited to get out there and play them.

247: How are you going to make the live performances different from the album – there are already a couple of the tracks on the album which are quite dancey already but there are more ballads really…
F: We’re going to try to have our cake and eat it really. It’s been Joe and Alexis’s desire for a long time to reflect the ballady songwriting side of the band, and I think that we’re hoping that audiences are patient enough to actually listen to both, rather than going for dancey stuff all the way through. We want to offer quite a lot, we want people to have an experience of lots of different kinds of moods, I guess, not just hammer away on Over and Over and ten other songs that sound like that. I think it’s quite important that we have a bit of range in what we do, because it makes it more interesting.

247: That’s what the band’s about really, isn’t it, not sticking with one sound…
F: Yeah, I think so. We’ve always tried to keep it open because we’ve never wanted to be defined as a dance act or a rock act, or whatever it happens to be – not even intentionally, that’s just the way that it happens when we make music together.

247: Lots of you are doing solo work – is there anything you’re doing?
F: yeah, definitely. I’ve got my studio with Al, and we’re working on producing albums by our friend Janine, that’s coming out next year. And our friend Rob, who is an artist called Grovesnor (he’s playing drums with Hot Chip at the moment) and he’s making an album that we’re helping to produce. Then me and Al are also making our own album, which is a pop album, with Al singing and writing a lot of the songs; that’s something that we’re hoping to release towards the end of this year, when we’ve finished doing lots of touring with Hot Chip.

247: So all these solo projects, they’re not going to damage the integrity of the band?
F: The band is quite a particular meeting of all five of us, and we’re all making music all the time, and it’s too much to be fitted under the Hot Chip name, so we need to have other ways to release the different work we do.