INTERVIEW WITH SOULS OF MISCHIEF 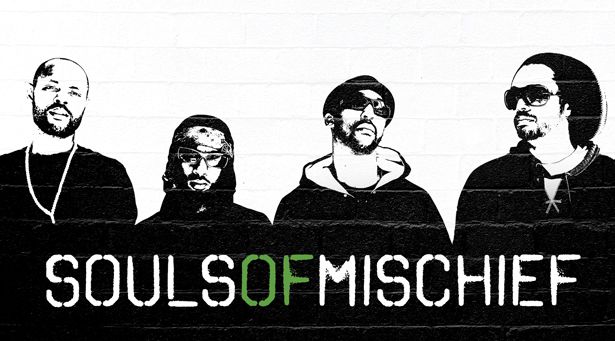 This month, hip hop legends Souls Of Mischief return to the South West for two gigs, one in Plymouth, and one in Penzance. It’s been nine years since the Californian crew played Plymouth for what was described as a night to remember within the city’s hip hop community. The four emcees met at school – the first two meeting at the tender age of 8. By the time they finished school, Souls of Mischief were ready for a major label release, and their first album “93 ‘Til Infinity” was a landmark in hip hop musical history. Souls have now released their hotly anticipated fifth album, Montezuma’s Revenge, produced by Prince Paul of De La Soul and Gravediggaz fame. To celebrate the release of the album, SOM have hooked up with streetwear label Carhartt and will release a limited edition box set of the album that includes a special SOM/Carhartt tee. Pete King aka DJ Bloodshot caught up with Tajai at home in Oakland, CA, for a chat about filesharing, UK garage, and German Shepherds…

What was it like working with Prince Paul?
He helped us produce a better Souls of Mischief record. His ideas interlocked with our style. He was like the glue that stuck everything together.

Everyone goes on about 93 ‘Til Infinity being such a classic era defining tune. Do you feel any pressure from that, having recorded it so early in your career?
Nah… We’ve never really been into making big hits. It was kind of a fluke that 93 ‘Til Infinity was a hit. We never try to recreate that, you know, there’s not going to be a 2011 ‘Til Infinity. Every record we make is different, although still fits in our catalogue.

What would you say has been the key to your longevity in hip hop?
Being secure in ourselves, believing in ourselves, in our own music and our own method of making it, and also being a group, a real group, we’re not a bunch of rappers who got forced together, we all play our own roles – we don’t rap alike, we have different styles, play different instruments. And we’re not trying to get every hot producer on every album – not that there’s anything wrong with Just Blaze or Kanye, but I think part of the reason hip hop is so homogenous now is that everyone is using the same producers… But we do our own thing.

So what changes in hip hop styles have you seen over the years? Like you said, they’re all getting a bit samey…
There’s a lot of good music out there, like Diamond District, Black Milk, Guilty Simpson, like, all these different groups and artists that are exceptional, but hip hop has become mainstream, and as a result, they’re looking for a homogenised version of it that caters for the masses. But you gotta understand, in America, although it seems there is all this choice out there, it’s the illusion of choice, because they pump the same stuff out over and over again. The playlist, when you listen to the radio, is exactly the same. We have a vast territory with all these different styles and all these different cultures, but unfortunately the playlists don’t reflect that, it’s all the same bullsh*t.

What do you think of the people who fileshare and download music now? Because you’ve got an independent label…
I think it sucks. I mean, it’s good to an extent, for exposing unsigned or underexposed artists, but as an independent, I cant afford to market the music I make, you know? Even to get a radio promoter would cost, like, twenty grand. So now, I need to sell four or five thousand albums just to pay my radio costs, on top of everything else. It’s really a losing battle.

It’s killed record shops as well.
Yeah. Its sad, because as a kid every Tuesday, I’d go get the new comics, and the new records. Now, everyone just sits at home – and the day a record comes out, everyone has it, but no one buys it. And why are people going to buy stuff when they can get it for free? It sucks being an independent record label owner. Filesharing has basically made it impossible to sell records. But you know what? I’m going to continue to make records because I enjoy it. I’ll just give them away, or never put them out. But that’s money coming out of my pocket, that’s mortgage money, that’s money for my children. I think that people should understand that they are killing independent music by not supporting it with dollars. You know what I’m sayin’?

So are you looking forward to coming to the UK?
Shit man, yeah. I like the fact that you guys have your own scene. Man, I like Wiley, I like Dizzee Rascal, I like Roots Manuva… When we first started coming to the UK, it wasn’t really like out here, there were a couple rappers, like Rodney P, but now y’all got your own thing, and I like that. That gives you an identity, like for instance, when I was young and I heard a lot of British rappers, it tripped me out that they had American accents, and it was like, wait, how does he talk like this, when he sings like that? And now, it’s like, I can’t even understand half the shit they’re saying. And its just dope. Like, ok, it reminds me of Jamaica or something, where it’s like, I don’t know what the fuck this guy’s talking about, but the music is really good. I like some of the garage MCs, they are murderers! They’ll give a lot of these dudes out here the business. American rappers are kinda getting lazy, and you guys show up, and its just like a sniper… I like that because you have to develop your own vocal scene, and you cant get to that level trying to emulate something from somewhere else.

So have you got a lot on for the rest of the day?
Yeah man, I’m really into construction, so I’m doing up the house, painting… I’m getting some new German Shepherds so building a kennel for them, just trying to keep myself busy….