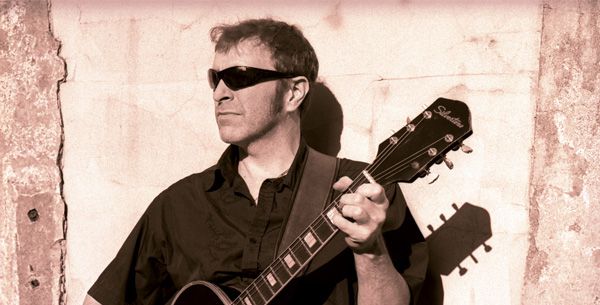 In the third of our Press Pack Sessions, Joe Biddle of Press Pack Studios chats to Vince Lee, virtuoso blues guitarist and vocalist. When he was a teenager, Vince tried his hand at gardening and restoring classic cars, but soon quit to concentrate on playing music full time and hasn’t had a day job since, which has turned out pretty well. He learnt to play guitar by dissecting old blues records by the likes of T-Bone Walker, Freddie King and Hollywood Fats – he never had a teacher and doesn’t read music, and everything he plays is a result of listening and developing an ear for music. He’s a busy man, and is involved in lots of musical projects; Vince Lee & The Big Combo, The Wildcards, Thomas Ford & The Dirty Harmonys, his duo with vocalist Becca Langsford and a regular duo gig with bass player Al Wallis.

This interview was filmed and edited by Scot Weller of Fire and Ice Productions.

You’ve just done a European tour – tell us a bit about it…
I spent three weeks traveling with my main touring band The Wildcards. We played shows in Belgium, Holland, Germany, Denmark, Sweden and Finland, fourteen shows in all. The tour was arranged to promote The Wildcards brand new album ‘When The Moon Shines Bright’ which we released in February 2010. It is available now at www.rootscd.com. All the shows on tour were great, in particular The Jeppis Blues Festival in Finland was pretty cool. It was the last night of the tour and we shared the stage with our old friends Wentus Blues Band… We covered about 5000 miles in our Transit van and it got damn cold in Sweden and Finland, 27 below I think!

What inspires you to make music?
I think I am naturally inspired to make music; it’s the only thing that has been consistent in my life so far. I have used it as therapy in darker times and it got me through some really low points in my life. Over the last two years I have found a lot of inspiration working with younger musicians. I always felt there was a lack of blues talent in Plymouth; it has always been a struggle to find like-minded players to work with. I worried that the blues was becoming a dying art in my hometown so it has been a relief to find a younger generation of players keeping it alive here. I’ve had the pleasure of performing with some great musicians who really “get” what the blues is all about! Among others, Thomas Ford and Becca Langsford have opened the music up to a younger audience here. This can only be a good thing. I think the city has always had a strong music scene but I think the standard of musicianship is a lot higher these days. There are quite a few live music venues in and around the Plymouth area and no shortage of good bands to see. I’d say it was healthier than ever.

Where do you see your musical career heading over the next few years?
I am at the final stages of mixing the mammoth task that is The Big Combo’s second album. I have been working on it for the last three years… The album features the regular three piece Combo with added Hammond organ from Paul ‘Bomber’ Harris, Becca Langsford and Becky Brine on backing vocals, George Comer on tenor and baritone saxes, Ian Petitt on trumpet and Patrick ‘James’ Pearson on strings. We have some great talent here in the South West so I look forward to spreading the word about it!

How often do you play live gigs?
I have a weekly residency at The Blues Bar and Grill on The Barbican every Tuesday night and I guess in an average week I do 4 to 5 shows. It never really gets tiresome. I get to meet some interesting people and I have performed all over Europe in places I would have never seen if I weren’t a musician. I enjoy taking my music to new places and seeing the reaction it gets. We have got some great festivals coming up this summer, which will keep me motivated and busy. I’m looking forward to summer gigs – after that European tour I think I’ve seen my share of snow this year!