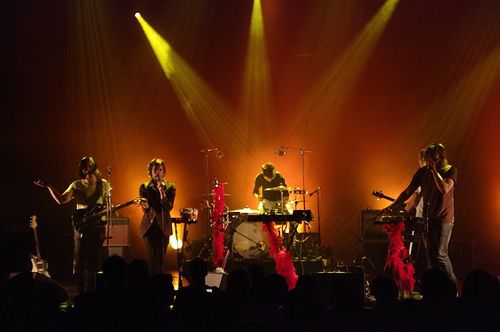 Casiokids have been tirelessly touring, gaining recognition wherever they go. Now they are about to hit the summer festival circuit with a date at the smaller Standon Calling. Here’s what they have to say about their year so far…

A bit of history to kick things off… What were you all doing before Casiokids was formed?
Omar was (and still is) a guitar teacher, I was studying art history, Aabø was a sound technician and doing music for dance performances, and Feddi was eating things.

Was the plan always to produce songs with Norwegian lyrics?
In the beginning we actually decided not to sing, and only used human voices sampled from audio books and interviews we did ourselves. As we experimented more with vocal harmonies in the studio we decided to follow the idea of making something as true to our everyday lives and personal experiences as possible, hence using the Norwegian language. I truly believe one of our main goals as artists and musicians has to be to create something unique and original, and the Norwegian language was for us a natural part to achieve just that.

You have had a very positive reaction from UK audiences, is there anywhere you have been that just didn’t ‘get’ Casiokids?
It seems like most audiences get something out of it. We’ve played all age groups, and although we’ve only done 2 continents it does not fail to amuse me that I see our music being played on the catwalk in Sao Paolo one day and the next it is playlisted on the radio in the Faroe Islands. Honestly, I don’t know what it is.

You have your own studio, so can you run us through the process of how a Casiokids track is put together – is it a team effort, and what comes first, the live version or the produced, finished article?
Kjetil, Omar, Feddi and I have very different musical backgrounds, and all the songs have different starting points, sometimes one of us did almost everything on a song and sometimes we made the whole thing together in the studio. We have certain pointers, boxes we have to check before we finish a song, production tricks and signature sounds, but apart from that the writing process was very different from session to session.

There is a lot of instrument-swapping at a Casiokids gig – can everyone play everything, or do you race to your favourite instrument and whoever is last gets the cowbell?
When we play so many shows as we do (almost every day) we keep the music fresh by swapping what instrument we play and also improvise a lot around the songs. Feddi I guess is the only one that can play everything, so he swaps around the most. I think I am the worst on the drums, but still I’ve found myself on the drum stool now and again. The most fun is when we get wireless mics. I saw some photos from the Moscow show in December last year, and there is quite simply no one on stage.

Your only UK festival this year is Standon Calling, did last year’s hectic schedule mean you are chilling out a bit more this year?
Not at all. the reason why we’re doing so many festivals elsewhere this year is that we played so many UK festivals last summer. In 2010 we’re doing a lot of festivals we haven’t done before, notably more festivals in Eastern Europe as well as many in Scandinavia, Switzerland and Germany. We’re very happy to come back to Standon as we had such a great time there last year, the weather was so nice and we also got to see and meet our hero Femi Kuti.

You have recently released “Topp stemning på lokal bar” in the US; is this an album, or a collection of singles to allow the US to
catch up?
It’s basically a best-of Casiokids 2009 compilation, with all the singles also released in the UK on Moshi Moshi, a couple of new tracks, and collaborations, cover versions and remixes.

…and can we expect to see an album out in the UK any time soon?
Yes! Working on it! Very very soon!