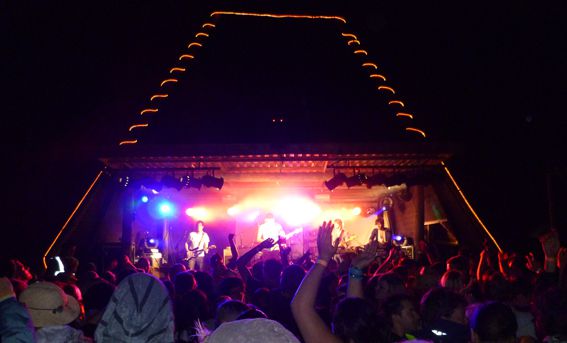 Now in it’s fifth year, Leopallooza is a festival which takes place just outside Bude.  Run by a bunch of dedicated mates who know how to throw a bloomin’ good party, the festival is growing year on year and is just getting better and better.  Tickets are priced at a truly bargainous £20 (which includes one night’s camping and parking).
The sun made an appearance on Saturday afternoon and shone on the small but perfectly formed festival site.  As always, the Leopallooza team assembled an eclectic and quite frankly all-round impressive bill that mixed local talent with musicians from further afield, like London’s Man Like Me and headliners The King Blues.  The crowd enjoyed performances from South West acts including Exeter’s The Computers, Plymouth-based punk rockers Crazy Arm, the ever impressive Kat Marsh and her beautiful band, the gorgeous Rosie Vanier (formerly of Rosie and The Goldbug), and the formidably talented Ruarri Joseph amongst many others.
There’s something pretty cool about being at such a small festival – as one friend put it, it’s just big enough to have a lot of fun – you don’t feel like you’re missing out on anything because you have to walk half an hour to get to the other stage, and you can wander off to the bar (the lovingly custom built bar) for more Rattler without worrying that you’re going to lose all your mates and end up sleeping under a portaloo.  Not forgetting Leopalooza’s now traditional burning car (fenced off and all safe and that…) which warmed many a festival goer on Saturday night.
This year, for the first time, acts were booked to play on the Sunday.  Quirky-pop-songstress Eliza Dolittle took to the Main Stage (which is called the Optimus Prime Stage – awesome) and blew away the hangovers with a chirpy set.  The perfect end to a bleddy good festival.
I for one can’t wait for next year.  Bring on Leopallooza VI!

Check out the mycornwall.tv film below