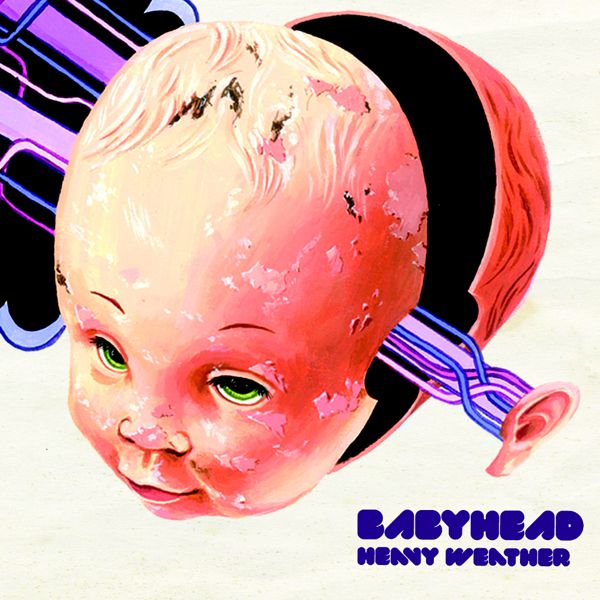 It’s hard to ignore Babyhead’s infectious helpings of reggae AND ska. The Bristol band has just dropped its third album, on the well-respected Rockers Revolt label. It’s bursting with good vibes, and what they themselves call “conscious flows with a boost for the party kids.” The band was spawned on the peat moors of Somerset, where they set about upsetting their neighbours and parents, forged by a common love for punk, hip-hop, and anything with a skank. Arash Torabi had a chat with frontman, Tom, aka Mancub and Littlerock.

Tell us about your part in Babyhead…
I write and perform all the words, do all the artwork, make most of the phone calls and make sleeping impossible for my band-mates, in the van on the way home from shows.

How did your new album, Heavy Weather, come about?
It’s a whispered scream through sunshine fuzz and thunder drums. This is the first record we have had any help with: Rockers Revolt are putting it out. Our first two records, The Geek show and Babyboomtown both came out on our own label, Cookie Cutter Records. Sonically, Heavy weather differs from the other two albums by the inclusion of space. It’s our first album that was written for the studio and not the stage: it has more space in the arrangements and sits easier on the palate. The beats are harder in places, the vocals are more melodic and the brass work is big and warm. Thanks to the gents from Get the Blessing.

And it explores a few themes?
We stay true to the ethic that we started with: conscious flows with a boost for the party kids. The themes are essentially the same in all of my writing for Babyhead: dreams, aspirations, politricks, life on the road, love, sex and death. I chat about the world as I see it, and the concerns I had in 2003 (when I wrote Geek Show) have not changed. We are still at war. Policy is still driven by the bottom dollar and our environment is still under threat. We still find love, we still work jobs and babies are still born. How I approach the themes may be a little different as I continue to change. I’m not shouting into the crowds on this one: I’m in your house, I’ve let myself in though an upstairs window, made a cuppa and I’m sat in the dark, waiting for you to get in from the pub.

So what inspires Babyhead?
We got the chance to play our records to a group of teenagers at a workshop the other day. We battered their ears with Steve Reich, Consolidated, Aphex Twin, Linton Kwesi Johnson, Billie Holiday, Frank Zappa and KRS-One. I guess that gives you a tiny slice of our collective musical leanings and how we got sound like we do today.

Would you say there’s a healthy scene for British reggae & ska?
Not sure if I’m best placed to judge the “scene”, but I’m big into Mr Benn and Prince Fatty right now. Some of our pals include Zen Hussies, Aspects (Bristol hip-hop legends), Lamb, T-Bone, Pama International (label-mates), Fat Freddy’s Drop and Ska Cubano.

How would you best describe a typical Babyhead live show?
Keith Allen described it as “the bastard son of Ian Dury and Iggy Pop.” If a smidgen of that were true I’d die a happy Mancub. We’re at our best when embracing chaos, and when the divide between band and audience evaporates into kinetic energy. It’s the art letting go and holding on just tight enough to keep it together: a tightrope between freak-show, British bulldog, stand up and indoor fireworks.

Heavy Weather is the brand new album from Babyhead, released on Rockers Revolt. See www.rockersrevolt.com
Babyhead play Bristol Fiddlers on the October 9, alongside their label-mates, Pama International and Mad Professor.
Tickets from www.ticketweb.co.uk