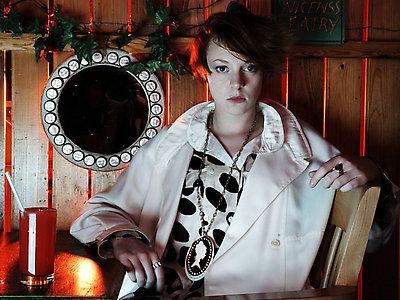 She’s got a shock of auburn hair with a distinctly 80s inspired Flock of Seagulls flicky quiff, which apart from being achingly trendy (the 80s are back, didn’t you know?) it gives you a pretty direct reference to her sphere of influence and goes hand in hand with the dreamy, synthy electro-pop sound of her music. Elly Jackson – better known as La Roux (named for her red mane, of course) is currently stealing the hearts of trendy music journos everywhere and was top of the list on all those “Ones To Watch” namedroppers at the end of last year. Alongside production partner Ben Langmaid, 20 year old La Roux creates pure electro pop, and allegedly only listens to 80s music, believing that current pop needs a shake up and should be more epic, like it was in the good old days (when she was just a twinkle in Mr Jackson’s eye – her dad, not the other Jackson… oh dear…). She is currently supporting Lily Allen on her UK tour and plays Bristol Academy on 18 March. 247 grabbed five minutes of precious La Roux time and tried to get to know her…

So let’s get started. Who have you been most pleased to be likened to in terms of other recording artists?
The Knife.

Last record you bought?
Penthouse And Pavement on vinyl by Heaven 17.

What gets you annoyed?
Lots of things, most things. Slow walkers are on my list.

Which era would you most like to live in, if you could time travel?
Tudor times.

You play synths and vocals – where’d you learn your skills?!
It just sort of happened…

What’s Ben Langmaid’s role in the band?
He is not in the live show but he is musical director and 50% of what we do in the studio. We write and produce together.

Have you been in other bands before? Or is this your first foray into the world of music?
I played electric guitar for a few weeks in a mate’s band called “5 Square Mile” as a favour. It was kind of caribbean, punk, electro…

You’re currently supporting Lily Allen on tour. If you had a choice of any musical act, who would you most like to support and why?
David Bowie.

Don’t want to tell us why?
Um…

Ok. Anyway… What do you do when you’re not making music?
Overanalyse and generally prang out.

Interesting. Who or what first inspired you to make music?
Not sure. I’ve wanted to do this for as long as I remember. My dad taught me the guitar when I was 6 though which probably got me started.

What are your goals for 2009?
I want the live show to be really great.

Who does your hair?! It seems to attract a lot of attention.
Me!!