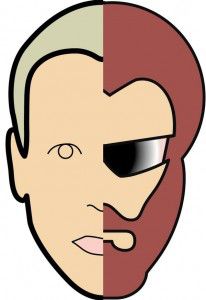 Unless you’re into jazz or surfing, the town of Bude in North Cornwall probably hasn’t appeared on your radar of late. Well, now it might, as Bude undergoes somewhat of a night-time renaissance. With new pubs and clubs in the ascendant, and talent from afar relocating to immerse themselves in its eternal seaside charm, things look peachy for those pushing Bude’s evening social scene forward. Leading light in Bude’s burgeoning music reawakening is Adam Russell, aka Carpetface, a London transfer now fully stitched into the Bude locale. On the threshold of releasing a new 5 track ep called, interestingly, the ‘Baboon Shampoo EP’, I caught up with him to have a chat about life in his world. Except I couldn’t actually catch up with him, fast and stealth-like that he is, so we settled on a Facebook interview. No one’s too busy for Facebook.

CF: Hectic and positive – been sorting out artwork for our new release and bookings in USA, Croatia and Holland, plus getting the gear ready for our 2009 French Alps tour. I recently gave up “impurities” so was grafting from 7am after basically being smashed every day for the last eight years! And I had a lovely mackerel and watercress sandwich.

C: Nice. So listen, Bude really seems to be jumping out of the trench with its music scene this year. I know you’re going to be involved in the new Kazbar (Bude nightclub) with Bianca Perry at the helm. Put us in the loop:

CF: I run the NO SLEEP TIL BUDE nights on the last Friday of every month and they’re a very silly affair indeed. It’s hip hop, funk, soul, breaks, reggae, dancehall and so on, and I get the chance to get some amazingly talented mates from the music biz down to play, DJ, play live and host it with my mic-buddy Audible, and also get people to come in fancy dress! A hip hop night where you can’t look cool or hard (because you’re dressed as something silly) means half the rubbish associated with the hip-hop scene instantly goes out the window and you end up with people laughing and looking silly while they dance to funky music, much better than popping caps in asses etc. I’m also running another night called Electroshock celebrating 21 years of electro, acid and techno. Now Bianca’s running the Kazbar we’re turning it around – music on Friday nights is more diverse and really good! It should help put Bude on the map as a wicked place to visit or in my case drop the city and move to. I just hope they never put a train station here or it’ll turn into Blackpool within a year.

CF: Well they do have a nice rollercoaster there. No wait that’s Alton Towers. I rest my case. What I mean is: come to Bude, its great, unless you’re a rude, troublemaking, polluting twat. Don’t get me wrong I always look for the best in people but rarely find it. Maybe I’m the twat…

C: You moved down here in 2005 to mix your debut album Have Mic Will Travel, and now run your studio and record label, Newbias from here. Tell me the pitfalls of living away from the big smoke.

CF: It was supposed to be temporary but I fell in love with the place and stayed – much of mine and Audible’s job is to play clubs in cities all over the world and after a tour the sound of the sea is so much more appealing than screams of “HELP! I’m being mugged!” or “I’m a stripe you bludd!” You get the picture (get me doe). London made me write out of reaction to the things that went on there, which while interesting and often exciting were mostly pretty dark. I found so many genuine people here. So much peace by the sea. Once I was out of the thick of it, away from the industry, away from running warehouse parties and all that crime I could kind of take stock of myself and get an aerial view of my project and actually finish the bastard… Pitfalls? There aren’t many really but no Jamaican or African grub sucks. It’s hard to get sushi even though there’s fish everywhere. Fousands of ‘em. Also it hurts that no matter how far away from the city you go (any further I’d be underwater) some people still play Mika records and say the word “Totty”. The worst one? It’s not very hip hop but here it is: I miss my mum. And her cats. And so does my doggy.

C: Talk to me about the Keith Levene project. I loved PIL, me…

CF: Yeah they were bleeding great. Who’d have though Johnny Rotten would end up selling butter? Not him I bet. The taxman does horrible things to us all in the end. Keith and I met in 2003 and he played bass on a track of mine called ‘Realeyesation’ which turned out to be one of the two most popular tracks on my first album. Last year we started experimenting again and came up with a lovely mess of an album project called Area 51. It’s a diverse mix of genres – the main rule is that there aren’t any rules with it; some tracks have his voice on, some mine, some we co-produce. It’s a bit of a mash up really and anything goes. Won’t be finished for a while. I need a project like that, as much like when I produced RW Hedges’ Almanac album or the Dirty Sanchez music, the new Carpetface & Audible album has a concept which was decided on before recording even began and kind of sticks to a plan. I don’t really enjoy breaks from work, so working with Keith inbetween our main studio and touring commitments is welcome recreation with no self-inflicted deadlines or pressure and we have a right laugh doing it. That’s why we both run 100% independent labels, because it gives you that sort of freedom. It’s a lot of work, not easy to do and not for everyone but if you’ve got the work ethic and business brain along with the talent and the balls then there’s nothing better in my book.

C: I just need to point out to readers that in a nod to advancing media strategies we took the slightly-less-than-pioneering-but-a-whole-damn-sight-easier-way-of-doing-things-when-we-both-have-busy-lives-and-dogs route, and did this interview on Facebook. With this in mind, to round it off firstly tell me the bonuses of online marketing tools such as this, and how the first night of ‘No Sleep Til Bude’ went down at the new Kazbar, which (potentially a magazine first?) happened during this interview:

CF: It’s pretty good! When we post a link to a free track from our new EP, people pass the link/track to mates they think will dig us, on word-of-mouth recommendation from someone they trust. Seeing your mate having a mad time at a night you missed makes you want to go to the next one so that’s helpful too – the first No Sleep Til Bude night went right off! People love fancy dress and I’ve since had the idea of a charity calendar at the end of the year featuring each month’s winners. It was a great start to what looks like a great year for us, Kazbar and Bude in general. DJ Format played on 1 May (the SW launch of our new EP) and Skinnyman is playing on 12 June, which makes me want to put on the Happy Happy Joy Joy song again. Cheerio xx

CARPETFACE & AUDIBLE’s 5-track “Baboon Shampoo EP” is out mid-May on ITUNES and 12″ vinyl. For more info on the release and tour dates visit the following sites:
carpetfaceandaudible.com
myspace.com/carpetfaces