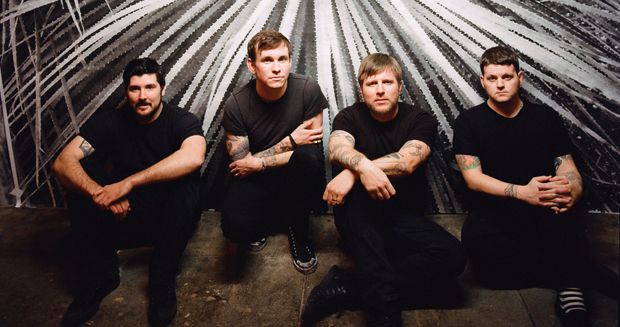 Butch Vig, who most people will remember as the producer of Nirvana’s ‘Nevermind’ and last year’s ‘21st Century Breakdown’ by Green Day, recently finished working with Florida’s Against Me! on their genre-spanning fifth album ‘White Crosses’. The punk rock four-piece, who previously worked with Vig on their critically-acclaimed release ‘New Wave’ in 2007, are about to head out on a headlining tour of the UK with Canadian hardcore band Fucked Up and Plymouth’s very own Crazy Arm. Rob Sleigh recently spoke with the group’s frontman Tom Gabel to find out more about the new album and the tour.

You’re about to embark on another tour of the UK, which includes two dates in the South West at Bristol and Plymouth. Do you enjoy playing over here?
Yeah, the UK’s great. I’m a fan of the food. I like the curries. I’m also a fan of dreary weather, so that’s never a problem for me. I’m also a huge fan of the UK music scene.

In Plymouth, you’ll also be playing alongside local heroes Crazy Arm. Are you a fan of theirs?
A huge fan. Their record ‘Born to Ruin’ is one of the few punk rock records that I’ve heard in the past couple of years that I’ve really latched onto. We’re really looking forward to hanging out with those guys.

Since Against Me’s debut album, the band’s sound has continued to evolve, particularly on new album ‘White Crosses’, which successfully blends a number of different genres and styles. Why has it been so important for your music to evolve in this way?
Some of it is not even intentional. The more you do something, the better you get at it and the more refined you become. Also, you’re intentionally trying to push the boundaries of what you’re doing to not become bored.

You’ve worked with Butch Vig again on this record. What’s Butch like to work with and why did you decide to work with him again here?
He’s my hero. The knowledge that I’ve gained from working with him is completely indispensable. I’ll be able to use it and draw from it for the rest of my life. Beyond that, he’s just a really cool guy. The kind of guy that’s fun to have a couple of drinks with and just hang out.

On a number of occasions along the way, you’ve been accused by some of selling out. How do you feel about that kind of criticism?
It’s always someone else’s definition of selling out. I always thought selling out would be if I decided it was time to hang up the guitar and put on a suit and tie to go to a desk job that I hate and be miserable for the rest of my life.

Your lyrics are quite personal. What goes through your mind when you’re writing songs?
We’re a band that always gets labelled as a political band, but that’s not something that I’ve ever sought when it comes to songwriting. I’m just expressing opinions that I feel on whatever topic I’m talking about. When it comes to writing, you just try and take an interest in everything and see what comes of certain topics. If something does come from it, it’s obviously something that you feel passionate about.

INTERVIEW WITH KINGS OF LEON