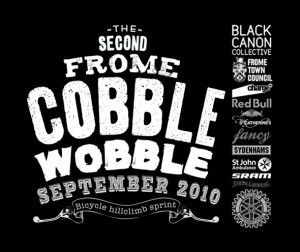 More than 1,000 people gathered on Catherine Hill in Frome to watch bikers take part in the second Cobble Wobble – with organisers hailing it a huge success.
The event saw 200 cyclists take on the challenge of climbing the one-in-seven ascent up the 179-yard cobbled medieval street in the town centre. Organiser Andrew Denham said: “I’ve been overwhelmed by all the great feedback, people have really taken to it and are clearly keen to see it back every year.”

Competitors took to the cobbles in all manner of costumes, ranging from full cycling club kits through to the crowd-pleasing Big Bird suit and dapper Sherlock Holmes-style attire. Jack Sowden won the under-14 category and Robin Liquorice topped the under-18 section. Adam Haycroft won the fixed wheel category.

The fastest woman on the day was Alice Shuttleworth and Mike Smith came out top in the over-50s category. Kim Little won the 18-49 category. Yorkshireman Chris Akrigg, widely regarded as one of the most skilled all-round mountain bikers in the world, took the King of Hill title after a blistering run of 21.51 seconds. Kim Little and John Russell completed the podium line in 23.24 and 23.5 seconds respectively. Last year’s winner, Neil Cousins, finished as the top Frome resident and tied for fourth with Robert Edgell.

Mr Denham said of the day: “I think the beauty of the event is that it’s just a bit of fun – even some of the professionals dressed up for the occasion. “We’d like to say a big thank you to the Black Canon Collective, Frome Town Council, Charge Bikes, Red Bull, Fancy, St John Ambulance, Frome Carnival Committee, Frome Rotary Club, Sydenhams and the local residents without whom the event couldn’t have happened.

“The Cobble Wobble looks set to be back next year and will celebrate all that is good about cycling and about Frome.” The event was sponsored by Red Bull, and local cycle business Charge Bikes.

WIN THE ART OF FLIGHT DVDS