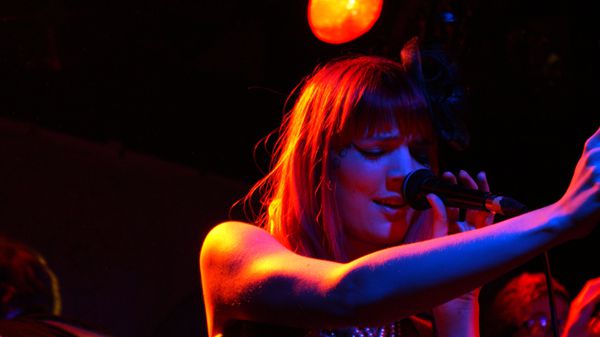 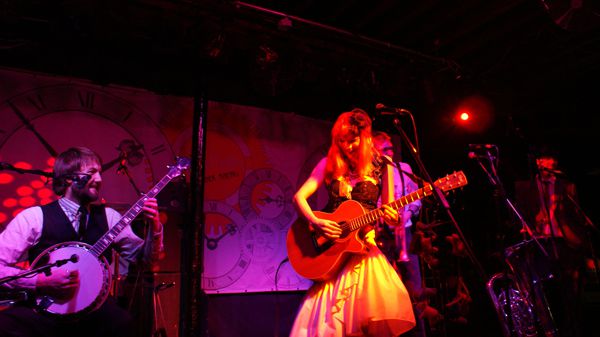 Fresh from a set recorded for Radio 4 that day and clearly full of energy, Gabby Young and Other Animals took to the stage of Bristol’s Fleece in resplendent fashion, welcomed with open arms by a loving crowd.
Young’s vivacious presence was heartily backed by a bawdy line-up from trumpet to guitar, and the band romped through their set driven by some hearty percussion from drums and occasional stamping feet. Bodies soon started to move, and within minutes, the usually reserved Bristol crowd, were dancing and joining in with the stunning lead singer’s remarkable voice.
Mercilessly blowing their hard working support acts out of the water, this group were as visually stimulating as they were pleasing to the ear, carousing across the stage and providing some impressive harmonies in the manner of an Eastern European street band. Its no surprise that the band name Go Go Bordello in their influences.
Quiet number serve only to showcase a vocal of striking and affecting precision, Young can sweep you from the Vaudeville heights of ‘Whose House?’ to an intimate whisper during ‘The male Version of Me’ with great charm and an easy rapport with the audience. The captivating ‘We’re All in This Together’ shone through the set, somewhat stopping it in its tracks, but with the wisely chosen ‘Snakebite’ as its conclusion, this was a gig that certainly left this participant eager to know where this band will take their act next. Gabby says this has been “our year”, I would argue that with performances of such a high calibre, they have it all yet to come.