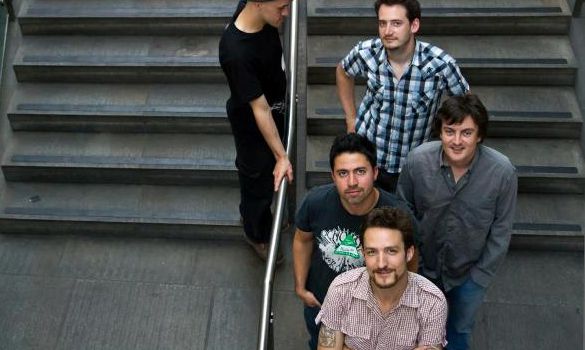 It’s been another busy year for the non-stop globetrotting folkster that is Frank Turner. Following the release of his third solo album ‘Poetry of the Deed’ at the end of 2009, Frank’s hectic touring schedule has seen him open for Green Day at Wembley Stadium and play at almost every festival on the UK calendar, including three sets at Glastonbury alone. With a new EP just out and another date in the South West on the way, Rob Sleigh got in touch with Frank to find out more about the new EP and the tour…

Your new EP ‘Rock & Roll’ came out in December. What can fans expect?
We decided to do an EP because the gap before the next album was so long, so we got in there and hammered out some new material. There are probably some changes in direction that other people can ascertain but, generally speaking, it’s what I’ve been up to lately.

The title seems fairly straightforward. What’s it all about?
One of the lyrical themes I’ve been thinking on recently is the mythology of rock and roll as an art form. In my lifetime, we’ll pass the centenary of the birth of rock and roll. It’s interesting to see something, that was originally predicated on youth and expected to be fleeting and disposable, reach such a landmark. There are some thoughts on that in there.

The EP’s brilliant lead track ‘I Still Believe’ has already received some great response at the summer festivals. What is the song about?
I guess this is the central song. It’s about taking stock of what rock and roll still has to offer. I wrote the song after doing a small tour in China and seeing the kids there totally losing their minds to rock music. Music that, in London, would have sounded pretty tired and clichéd. It reminded me that the idiom is still incredibly powerful and something to be celebrated.

With all the festivals and tours, you seem to have been gigging non-stop recently. Do you enjoy touring as much as you appear to?
Yes. If I didn’t, I wouldn’t do it so much. Obviously there are days when I feel run down or whatever, but that happens in any walk of life. I feel like I’m cramming as much into life as possible, which is important to me.

What are the main things that you get from it?
Breadth of experience. I like travel, I like meeting new people and I like seeing new things. I also love playing music and trying to entertain a crowd. It makes me very happy.

Talking of touring, you’ve got some more dates coming up at home in the UK. What can people expect this time around?
A gentleman never reveals his setlist. I like to make shows feel like a celebration and get everyone involved, so I’m working on that. We’re going to get quite a lot of new material in the set as well because we’re in the studio in January.

You’re doing another show in Exeter, which follows last year’s appearances there and in Plymouth. Do you enjoy playing down in the South West?
Yeah, the South West is always fun. I sing about it too [Laughs]. Some of my family are from Devon and I spent some of my childhood in Cornwall. It’s quite a wild, folksy area of the country and I enjoy that a lot.

Any memorable occasions?
Many. Too many to mention.