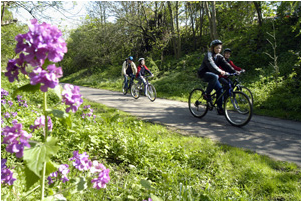 Three amateur movie makers have won the top prizes in a UK-wide film competition about the National Cycle Network run by UK charity Sustrans. The charity that has developed 12,600 miles of this walking and cycling network across the UK, asked people to make a short film about why they love the network and what it means to them. The winning entries were chosen for their enthusiasm and passion as well as for their movie-making skills. The films were judged by TV presenter Adam Hart-Davis who is a Sustrans patron, Wallace and Gromit Creative Director Merlin Crossingham, and Dr Alice Roberts, anatomist, broadcaster and keen cyclist.

In the 11-17s category, 14 year old Louis Clark from Backwell, just outside of Bristol, provided the winning entry with an inspiring film featuring his friend Erik, which showed the adventure, freedom and enjoyment they get out of getting out on their bikes and exploring the network. Louis wins four VIP tickets to the Relentless NASS Sports and Music Festival in July. “Me and my friend Erik made the film to try to get other people cycling and make it look cool and fun – because it is,” he said. “We go cycling because we know that we need to keep active and fit but we use the network as we know it’s a safe place to cycle, no cars passing by and we love the beautiful scenery that we pass.
It only took us a day to film it, although the editing was longer, but it was good fun.”

Steve Castle from Penarth, South Wales wowed the judges of the over 18s category with his slick and well produced film about his commute to and from work in Cardiff. Steve showed how enjoyable and easy an everyday trip into work can be and how it takes him through beautiful areas of Cardiff and keeps him away from those traffic jams. Steve wins a luxury four night break in a log cabin, courtesy of ForestHolidays. He said: “I’m new to cycling to work but once I started I really enjoyed it and now I’m a total convert. Cardiff is a small city and so easy to get across by bike. It’s so enjoyable – and alot less hassle than trying to get a car around. I never thought the film would win – it was just a lot of fun to do. I hope it shows other people how enjoyable and easy it can be to commute by bike.”

Malcolm Shepherd, Chief Executive of Sustrans, sayid: “We wanted this competition to inspire millions more journeys on the Network by compiling stories about the impact it has made on people’s lives so far. These films are fun and inspiring and, we hope, show more people what the Network has to offer – whether it’s for commuting, family time or adventure.”
The Sustrans website – www.sustrans.org.uk – has a free online map service to discover how to get around everyday on foot or by bike. Search for local or national routes, plot journeys, or find what the local area has to offer from schools, supermarkets and local landmarks to car clubs, bus stops and bike shops.

WIN A COPY OF THE REBOUND ON DVD