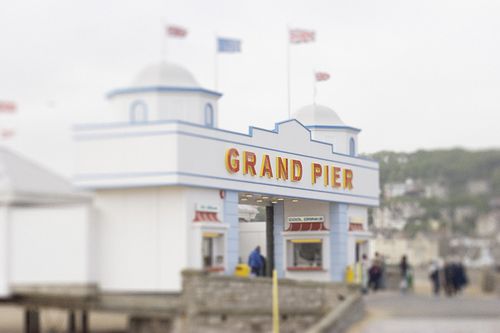 Rapper Tinchy Stryder is the first major music act to play a gig at the Grand Pier in Weston-super-Mare. The Radio One favourite will take to the stage of the newly refurbed pier on Friday January 28 with support from local lass Nancy (whose demo we reviewed last year). Nancy is the youngest daughter of Quarrymen keyboardist John Duff and has been involved in music since she was a teenager but this will be her biggest gig to date. She has also just written and performed the soundtrack for the new British movie ‘Buffering’ (see below). The Grand Pier was gutted by fire back in 2008 and owners have been working hard to restore it to its former glory ever since. This year they are introducing a jam-packed calendar full of events. Tinchy Stryder rose to popularity with the song ‘Take Me Back’ which reached number three in the UK Singles Chart in January 2009. His next hit ‘Number 1’ was a collaboration with N-Dubz, which entered the charts at number one in July 2009. His second number one ‘Never Leave You’ featured Amelle Berrabah from girl-group, the Sugarbabes. His current tune doing the rounds is ‘Gangsta’. However, organisers were forced to drop the ticket prices from £27.50 to £19.50 in order to fill the venue. Anyone who paid the higher price will be reimbursed the difference. Exclusive VIP tickets will be available at £75 each. The VIP reception will be held in the Regency Suite with canapés, bar and of course, the best view in the house, closest to the stage. Doors open at 5.30pm until 7.30pm. Tickets available from Bristol Ticket Shop.
(Photo by Steve Johnson via Flickr)