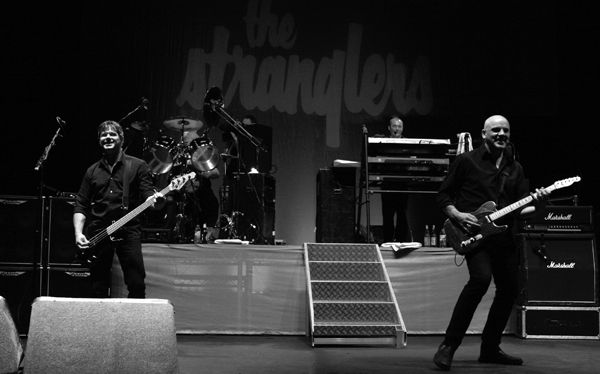 Old pros The Stranglers have been going for almost four decade, the last of which they’ve been fronted by Sunderland punk rocker Baz Warne. More recently they’ve been hauled up in a rented house on the outskirts of Bath rehearsing for their forthcoming tour and writing new material. We grabbed a quick chat with Baz ahead of The Stranglers gig in Bristol on March 24.

“We’ve rented a house on the outskirts of Bath,” he said. The city is only five minutes away but when you’re up here on your own its great, its total isolation. The view today is drop dead but it’s so foggy today, we might as well be on the moon.

You were only about 10 years old when The Stranglers were formed so how you become their singer?

“I was in The Small Town Heroes and we toured with The Stranglers in 95 and 97. When they lost their guitar player, rather than make it public, they contacted people that they knew. 7-8 different guys, one of which was me. I was absolutely skint at the time so my mate leant me the train fare. I went to London and got the gig on the spot, within 10 days we went to Kosovo and Albania – for the peace keeping forces and the United Nations. It was great fun, real baptism of fire.”

What’ve you got planned for this year then, other than the UK tour?

“This year we’re playing several European festivals, including Benicassim in Spain and another in Greece and Israel and Bergen in Norway. We’re hoping to do some more UK ones. The only big one we haven’t really done is Leeds and Reading. Festivals are brilliant, they get us a wider audience, we did Glastonbury last year with 80,000 people there. Looking down at the front, there were people from everywhere, all different ages and all walks of life, beautiful girls, hippies, all kinds of people. The weather was glorious and a lot of people were waiting for us cos we hadn’t done Glastonbury cos we’re bad boys. Then you can go and see some bands you might not have seen and see people you haven’t seen in aged, like I said, festivals are brilliant.”

Any tips on new bands to look out for?

“To be honest I’m on a bit of a busman’s holiday, I’m so involved in rehearsing and writing I’m not listening to a lot of music at the moment. I do keep my ear to the ground with a lot of the local stuff where I come from. I’m classed as an older statesman for new bands there. I also listen to a lot of Neil Young. I went to see him live in Sheffield 10 years ago, when he played with Crazy Horse. I love all Neil Young – the loud numbers and the love songs. It just blew my mind.

How has the music industry changed since you started playing in bands?

“When I was a kid there was no such thing as the Internet, no such thing as mobile phones; when an album came out, you got the bus to town, queued, smelled the sleeve and if you were lucky got a tantilising glimpse of your band on Top of the Pops. The music business has changed so dramatically since we started now you can download stuff and steal stuff months before it’s out. Obviously that community has its pros too – it can be used as a great tool. I wouldn’t be envious of any bands starting from scratch cos unless its drop dead it will fall through the net. If you learn to adapt successfully every period can be a gold period. As a live entity this band has never waned. There have been peaks and troughs but there’s never been a problem pulling a crowd, we’ve got such a loyal fanbase.”

“You get all kinds of bands pretending to be bad boys but they’re just pansies – like the Gallaghers. I think it’s funny. If people want punk and real characters nowadays they look at all the old people – Neil Young, Bob Dylan and even U2 (ignoring the lead singer.)

And the Stranglers of course! So what next for you guys?

“We’ll be here til one of us dies on stage. People still have a fascination with this band. The Stranglers have never broken up, the only other ones who can say that are perhaps The Damned, who are hanging on by their fingernails. But other, The Undertones, The Police etc, they all get together every now and again to make a few quid but that’s about it. The Stranglers have never done that. I’m not Hugh Cornwall (original singer ) but I’ve been here 11 years now and I’m part of it. When you see the rapture on people’s faces it just proves that people still want it. Our drummer’s 73 (he’s like my Dad – I’m only 46) and they can’t believe that such power and menace and classic.

Tickets for their Bristol gig available from www.gigsandtours.com