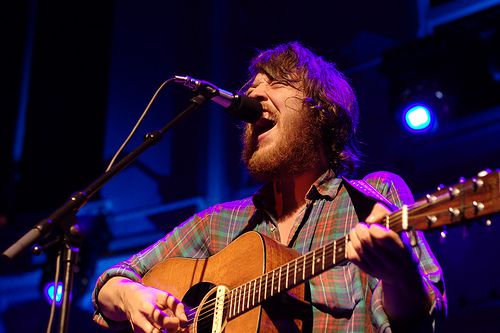 Americana giants Fleet Foxes are the first act to be confirmed for this year’s Eden Sessions at the award winning Eden Project, nr St Austell, Cornwall. The group will be joined on the picturesque stage by Villagers on July 1. Both bands were today also revealed as acts playing the Green Man Festival in Wales in August. Tjarko Wieringa, Eden Sessions Creative Director, said: “Fleet Foxes have created a unique, unmistakable sound and their beautiful harmonies will make for a very atmospheric show in the shadow of the Biomes. Following their Mercury nomination, Villagers are definitely a band to get excited about and their sound will complement the headliners perfectly. We’re really excited about our upcoming announcements too and our tenth year is set to be a very special one. We’re talking to some amazing acts and we’re confident that this summer will see us capture the spirit of the best Eden Sessions. Look out for more announcements very soon.”
The Eden Sessions are now in their tenth year. Performers in previous years include Oasis, Kasabian, Mumford & Sons, Florence and the Machine, Muse, Paul Weller, Jack Johnson, Hot Chip, Snow Patrol, Moby, PJ Harvey, The Verve, Chase & Status and many more.
Tickets for Fleet Foxes Eden Session cost £37.50 plus booking fee and will go on sale to Inside Track members at 6pm on Tuesday February 15 and then on general release at 6pm on Friday February 18. Tickets are available from the Eden box office on 01726 811972 and at www.edensessions.com