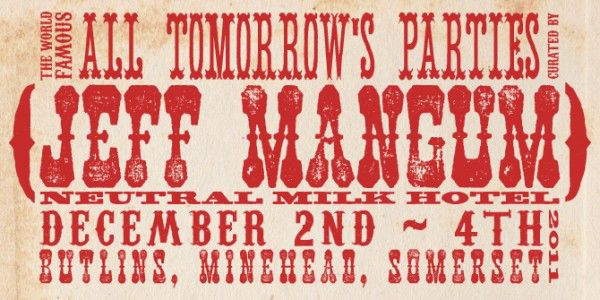 The December offering of All Tomorrow’s Parties (ATP) at Butlins in Minehead is being curated by Jeff Mangum from Neutral Milk Hotel. The three-day festival, which takes place on December 2-4 will see Mangum perform some of his Neutral Milk Hotel hits. It comes after he plays ATP New York at the end of September/beginning of October. A spokesman for ATP said: “ATP Concerts are very excited to present the return of Neutral Milk Hotel’s Jeff Mangum to headline and curate one of two festival weekends planned for December 2011 at Butlins, Minehead. After releasing what is now one of the most loved and critically acclaimed albums of the 1990s (In The Aeroplane Over The Sea), Neutral Milk Hotel disbanded before many of those who now love their albums had a chance to see the songs performed live, so Jeff’s much anticipated return to the live stage this year will no doubt be a very special occasion for fans throughout the UK and worldwide.” As well as headlining, Mangum will choose around 40 acts to play across the weekend on three indoor stages with a total festival capacity of around 5500 people. Mangum will perform more than once in the more intimate Centre Stage venue, although entry to only one show is guaranteed – he will be performing a solo acoustic set. Acts already confirmed include Superchunk, The Olivia Tremor Control, Young Marble Giants, The Magic Band, The Raincoats, A Hawk and a Hacksaw, Tinariwen and The Apples In Stereo. Tickets go on sale this Friday (Feb 18) from www.seetickets.com priced £170 per person room only or £180 self catering. Early bird discounts are available and will knock £20 off the price. There is also an option to pay by installments. ATP’s next UK events are ATP curated by Animal Collective in May in Minehead and I’ll Be Your Mirror curated by Portishead in London in July are also on-sale now. More info at www.atpfestival.com