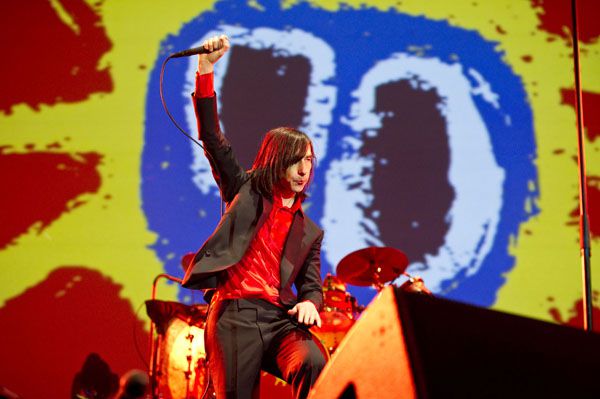 Primal Scream are bringing their classic album show. Screamadelica, to the Eden Sessions in Cornwall this year. Screamadelica Live will see the Glaswegian six-piece return to the Eden Project to play the entire album, considered to be one of the defining records of the nineties. They will be joined on the bill by indie rockers The Horrors, who will be playing ahead of the July release of their third studio album. Primal Scream previously played at the Sessions in 2004, a show that is considered by many to be one of the best gigs Eden has ever hosted. With nine studio albums spanning more than 20 years behind them, Primal Scream are one of the pre-eminent indie rock bands of their generation with 1991’s Screamadelica, their third record, still considered by most to be their best work. It is also famous for its eye-catching sleeve art, which was chosen by the Royal Mail for one of ten album cover postage stamps issued in January 2010. Songs such as Loaded, Come Together and Higher Than the Sun has become synonymous with nineties culture but, remarkably, the band had never performed the album in its entirety until an acclaimed pair of London shows last November. Primal Scream will be joined on stage by legendary DJ Andrew Weatherall, who was one of the producers of Screamadelica and was instrumental in creating the band’s sound.

Tjarko Wieringa, Eden Sessions Creative Director, said: “Primal Scream played a brilliant show here on their first visit. We can’t wait to see them perform Screamadelica, perhaps the greatest British record of its generation and the album that defined the band. Special guests The Horrors are a very exciting live band and it’ll be great to get a preview of their new material. The 2011 Sessions are shaping up nicely. With Primal Scream, Fleet Foxes and the other great bands we’re currently talking to, we’re confident that the tenth year of the Eden Sessions will be the best.”

Tickets for the Primal Scream and The Horrors Eden Session cost £37.50 plus booking fee and will go on sale to Inside Track members at 6pm on Tuesday February 22 and then on general release at 6pm on Monday February 28. Tickets are available from the Eden box office on 01726 811972.