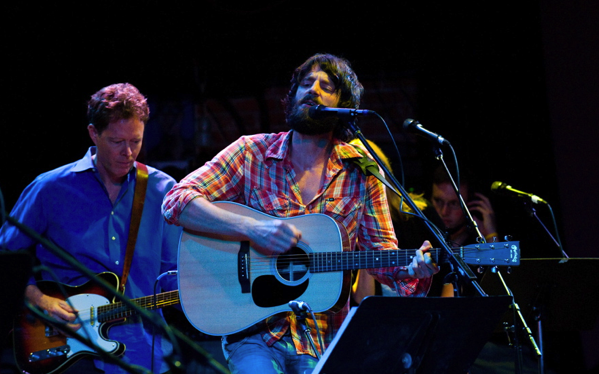 There are very few artists who are able to transcend the image and the idea of cool anymore. With Twitter, youTube and countless other viral portals into the private lives of stars, it’s hard to find an artist with that genuine, seemingly effortless ‘cool’ who does not really want the notoriety when the house lights go on and the encore ends. Ray LaMontange, the soft spoken, folk crooner from out in the coutryside of the US cast that allusive, surreal atmosphere in Colston Hall as he conducted his band the Pariah Dogs, through their album, “God Willin’ and the Creek Don’t Rise” and his solo albums.
LaMontagne settled in on Thursday night at Colston Hall and shed his soft spoken exterior, opening up to the audience, letting them into his strange musical world with tracks like ‘Shelter’ and ‘New York City’s Killin’ Me’, but never totally removing that mysterious air. LaMontagne’s blues and rock influenced folk music is often subdued and lyrically complex, but his live arrangements had a drive and intensity that amplified his passion and revealed his personality more and more. These added elements were partly made possible by his band the Pariah Dogs.
Enough cannot be said about the support of his band; with tight arrangements and just the right amount of improvisation the Pariah Dogs and LaMontagne felt like one tight cohesive unit rather than a singer, songwriter with help from a backing band. The Pariah Dogs were highlighted on a melody rendition of the opening track of their latest album, ‘Repo Man,’ that brought out the best of each of the performers. In addition to the Pariah dogs, LaMontagne was joined by openers, the country, folk duo The Secret Sisters, for a few of his own songs, as well as a number of covers, who again highlighted the versatility of songs.
Even though LaMontagne has won a large number of awards for his music, including a Grammy for his newest album, he never seemed over confident or aware that he had sold out Colston Hall and that the audience was there for him. Instead of being centre stage, LaMontagne stood off to the side and presented the music to the audience and made the night about that. It was nice to see that it was just the way LaMontagne liked to have it; him blending in as an anonymous member of the band and letting the lyrics and music do the talking. At the end of the night he thanked his band, the crowd, and tipped his hat to everyone and strolled of stage to a standing ovation with every knowing he was as cool as ever, but I do not think he really noticed.

HOOTERS TO OPEN IN BRISTOL