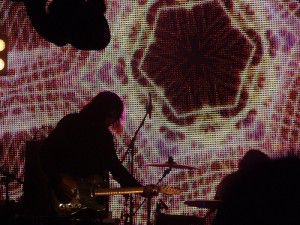 London-based The Boxer Rebellion kick-start a good few months for music lovers at The Fleece, with their sinister charm and darkly brooding sensibility. Sure, we have seen acts like this before – pulsing indie-rock, hidden torment, melodic guitars and simple 4/4 time signatures – but there is something immediately captivating about The Boxer Rebellion. Understatement. That may sound a fickle quality in a band destined for UK success, but in allowing the music to do the work, Tennessee-born vocalist Nathan Nicholson has the space to draw in the crowd with powerfully melancholic notes and lyrics. Backed by a band ethereally building to crescendo, you have a performance which becomes almost voyeuristic – you become caught up in the sound as if The Boxer Rebellion are playing to you alone. Touring their new album The Cold Still (it is the first to be thrown over to a single producer, the safe hands of Ethan Johns (Kings of Leon, Ryan Adams, Ray LaMontagne)) immediate stand-out tracks include Caught By The Light and No Harm, which are Fleet Foxes infused, along with the superb Organ Song, which wouldn’t be out of place musically on Jonsi’s Go album. However, the best track of the evening came in the middle of the encore. Locked in the Basement is a track that shows everything The Boxer Rebellion has to offer. Arpeggiated guitars, subtle drums, vocal harmonies and choral breakdowns all weave towards an understated, yet inspired climax.