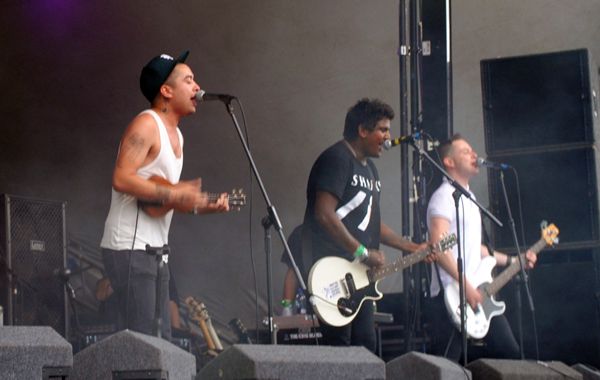 Shamefully, having lived in Bristol for years this is the first time I’ve been to the Bierkeller and judging by this highly-charged belter of a gig it’s a wonder it’s not used for gigs more often. The King Blues say they love playing Bristol and even went as far as to profess it’s one of their favourite cities in the world and it’s not hard to see why. This gig was postponed from last year and the timing couldn’t have been better. The low-ceilinged, grimy room was perfect for the political ska executed with such rigour by this troupe of musical warriors. At times you couldn’t see the stage for the sea of clenched fists in the air. There was a constant mosh pit down the front and the odd crowd surfer but mostly this gig was filled with the disassociated youth skanking as if their lives depended on it. This was like Madness meets The Streets or The Specials meets the Sex Pistols and boy did it hit the spot. The undeniably catchy music moved between anger and joy like a beautiful bi-polar beast.

From the moment the lovable punks launched into Let’s Hang The Landlord, they had the whole room in the palm of their hand – the audience singing/spitting along with the potent lyrics. This carried on through Set The World On Fire, Mr Musicman, Out Of Luck, I Got Love and Headbutt; but was none the more special than during The Streets Are Ours with everyone responding to frontman Itch’s shout of ‘who’s streets?’ reply ‘OUR STREETS!’. In fact, that was the overwhelming taunt which enticed the group back on stage for the encore – which saw Itch neglecting his musical roots for a bout of feminist poetry – entitled Five Bottles Of Shampoo. You’ve gotta give it to them, there aren’t many bands who can incorporate a spontaneous poetry reading into their set and get away with it but Itchy totally did. It made for the prefect segway for the last stomper of a song Save The World Get The Girl where Itch proclaims: “Going to war to prevent war is the most stupid thing I ever heard!” True that.

In true punk style, The King Blues carried on the party at The Croft, one of the first places they played in Bristol. They’ve clearly come a long way since then – no doubt helped by the tumultuous political landscape of the day – and methinks they’re just what this drab recession-beaten country needs right now. It’s just a shame they seem to be in that camp of their own at the moment. But as long as we’ve got Itch, Jamie Jazz and co we’ll be alright.