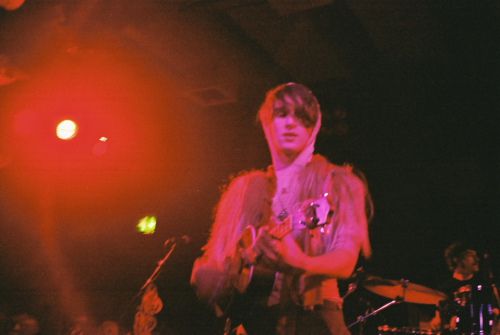 Patrick Wolf returned to the Thekla four years after he last graced the stage in the belly of this ship. And how things have changed; soon to be a married man and about to release of his fifth studio album, Patrick has grown and developed both musically and personally. In more recent shows, he no longer wears outrageous costumes or the mountains of glitter and makeup, stating he wants to be ‘known more for the music, rather than the outfits’.

But of course, this is Patrick Wolf – and he can’t quite let go of his outfits completely. And so he walked on stage at the sold out show wearing what could best be described as a Batman cloak with feathers. He opened with new song ‘Armistice’ from his upcoming album ‘Lupercalia’. Other tracks off the new album included previous single ‘Time of My Life’, ‘Bermondsey Street’, and ‘House’. But long-term fans of Patrick were the ones in luck tonight, as he brought back long-lost and rarely played songs from his extensive back catalogue, to the absolute delight of the crowd. ‘To the Lighthouse’, ‘Souvenirs’, and ‘Godrevy Point’ were among the ones to get the biggest cries of surprise and joy. Of course the crowd always have their usual favourites, and ‘Magic Position’, ‘Tristan’, ‘Bluebells’, and ‘Bachelor’ prompted some of the bigger sing-along’s of the night.

In true Patrick style, he always charms the crowd; even when he forgets the words or chords to his own songs his audience is always patient and forgiving. And the atmosphere at his shows can only be described as magical; his fans are always so captivated by his presence, looking up adoringly at him, completely under his spell. People actually listen to his music, there’s barely any murmur of talking during the quiet periods, and there’s far more a sense of respect. And Patrick gives back, by holding onto the hands of his fans as he sings, always trying to create eye contact and making each member of his audience feel a part. He lavishes praise and love on the Bristol audience – telling us this show, the penultimate night of the tour, is one of his favourite, and reminisces back to the last time he played the venue. Returning for the encore complete with costume change, Patrick ends tonight’s show with current single ‘The City’. Such a fantastic performance, and setlist.