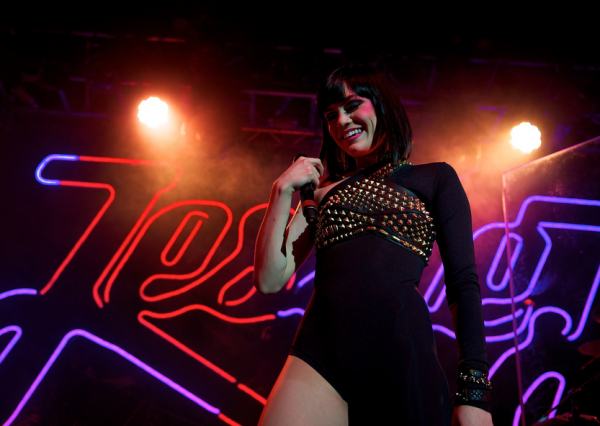 Jessie J stomped into the O2 Academy on Friday night to a packed out crowd of chanting fans. And boy did she stomp in style. The warm up acts provided a suitable intro but the excitement for Jessie to take the stage was palpable. After raising a black curtain to mask her entrance, she appeared in a shadowed silhouette amidst screams of her name. Kicking off with Mama Knows Best she got the crowd riled up in her black onesie with one leg and arm cut off and gold platforms. From her opening note to her final goodbye, it was clear to see that Jessie was born to perform and truly loves her audience. She spent her entire set making eye contact and waving at multiple fans in the audience, even picking up a written note from a fan and borrowing a puffer jacket for her hit single Price Tag. The acoustic live versions of her songs, including her first single Do It Like a Dude, were a testament to her talent as it gave her the opportunity to showcase her impressive vocal range. Her anecdotes between songs were heartfelt and humble as she described her pain of having songs stolen and recording an album with Gut Records before they went bankrupt. But her message to the up and coming, or simply anyone who dares to dream was her most poignant “All I wanna say guys, is we’re all the same. You can be me. Just keep going.” Jessie brought the crowd to a complete standstill by declaring that her US label had brought up a clause in her contract, stating that she could not sing Price Tag live more than a few hundred times a month and she had exceeded her quota. This was of course an April Fool, and a highly convincing one, but judging by her performance let’s hope the rumours of her spreading her skills to musical theatre and beyond are no joke.

HOOTERS TO OPEN IN BRISTOL