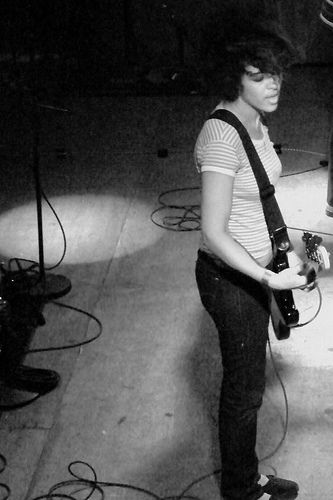 Portland, Oregon, shits good bands. The Thermals are an example of an ever increasing list of brilliant bands to have come out of the indie rock capital of America in recent years and last night they played to a baying crowd at Bristol’s Fleece. The last time they crossed the pond was way back in 2009 so no wonder, on the 2nd date of their new UK tour, the excitement was palpable. Kicking things off in style, potty mouthed female foursome The Coathangers provided the perfect support for the main act. Apparently formed as a joke over 4 years ago the Grrls have gone on to take their screechy riot rock global. With songs such as the charmingly titled ‘Shut The Fuck Up’ they sure packed a punch. The fact that the lyrics are about as subtle as a kick in the groin was overshadowed by their pure anarchic fervour, manic arm pumping and hilarious yelping. Although not my cup of tea, the reception from the crowd was good, the girl’s screamy anthems were weirdly enthralling and the bit where they jumped around shrieking ‘Get your hands off my shit’ was particularly entertaining.

Without a second to catch our breath The Thermals launched into their set at breakneck pace. However I didn’t expect anything less from a band who managed to hotfoot through an entire 13 track album ‘More Parts Per Million’ in less than half an hour. The strong opening guitar riffs and frenzied drum beats signalled the rip rawing crowd pleaser It’s Trivia, the opener to the guys first ever album. The high-energy sound a perfect compliment to the ‘life is too short’ sentiment of the song. A maxim the guys clearly live by, as lead singer Hutch Harris admonishes in It’s Trivia; ‘it’s only trivia, so don’t freak out’. Next up and firmly on old territory was ‘Brace and Brake’, a 2 minute cacophony of riotous chanting, ear splitting drumming and manic guitar-playing which wound the crowd up into a veritable frenzy and left me hoping the speakers wouldn’t blow out. This is clearly where The Thermals are the most comfortable – they exuded the confidence of a band that have played together for almost 9 years and seemed very much a big band on a small stage. Spontaneous chanting and foot stamping swept like wildfire around the room showing that the spirit of punk is still very much alive and well. As Harris et al got sweatier so too did the crowd. I recently saw The Thermals described as ‘having been fed too much orange squash’ and it is this hyperactive passion evident in both their stage presence and music that makes them an unmissable live act. The atmosphere in The Fleece was electric. They continued to blow the cobwebs away with more buzzing hooks and down-right catchy pop/rock numbers, which were at once spiky and infectiously euphoric. Although it was at points, hard to tell one song from another it didn’t matter because that one song was a bloody good one.

As opposed to some some touring bands/artists who steadfastly refuse to play anything other than their latest offering, the setlist was back-catalogue heavy. Songs from 2010’s Personal Life were sparse, perhaps because this album is distinctly more introspective and slow-building than we’ve previously seen. The Thermals have got a lot of mileage from their simple pop punk sound, uncomplicated riffs, pounding percussion and spunky attitude. It’s all part of the charm. They’ve broken away from this formula on Personal Life, but in the hope of finding a new sound they’ve sadly lost some of their appeal. With many of the songs reaching the four-minute mark I fear after years of rapid-fire indie rock these guys are exhausted. However, the stand out album track ‘I Don’t Believe You’ was a personal favourite of the night, it’s annoyingly catchy, upbeat and when performed with galling effrontery and drenched in chutzbah, it reminds me of why I fell in love The Thermals in the first place.