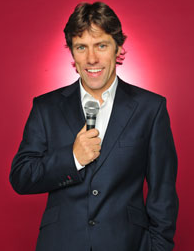 If Liverpudlian comedian John Bishop seems relaxed onstage that is because he is. Storytelling comes as naturally as taking breath to this handsome, former semi-professional footballer with the biggest smile in stand-up. “I just want to recreate the feeling of talking to my mates in the pub. I know it sounds odd doing it in front of 16,000 people, but I can.”

Bishop, born on 30th November 1966, has plenty to smile about at the moment. He is in such demand that he only finished his last tour at the start of the summer and after a month off was already warming up for his new tour.

“I’ve called this the Sunshine Tour, because someone said to me it’s been a big year for me, it’s my time in the sunshine. I thought that was a lovely phrase.” Yet only a handful of years ago Bishop was doing a similar act, chatting about his family and the trouble with travelling on budget airlines where the tea costs more than the flight, and playing to tiny audiences. At one gig there were only five people. He suggested giving them all a refund, until the promoter said only two of them had paid.

Things took off, however, after his last show, Elvis Has Left The Building, which was shortlisted for the prestigious Edinburgh Comedy Award in 2009. In this hilarious autobiographical set Bishop reflected on being the same age as the King of Rock and Roll was when he died and worried that his life was insignificant by comparison. He extracted great humour out of his mid-life crisis – making the forthcoming live DVD essential viewing for men of a similar age – as he worried about fighting the flab and still not being able to fix a car.

Bishop was being unfair on himself for comic effect when he joked that he had not achieved much. For a working class son of a docker he did well, becoming sales director for a leading pharmaceutical company. But he chucked it in to have a crack at comedy. In 2000 he was separated from his wife Melanie and found himself in the Frog and Bucket club in Manchester on a talent night. He spontaneously decided to do a few minutes and left to rapturous applause after half an hour. “All I was doing was talking about my divorce,” he recalls. At a later gig Melanie was in the audience and she was clearly impressed because they got back together.

Chatting in his dressing room following a winning appearance on ITV1’s Loose Women, Bishop is changing shirts and reveals an elaborate swirly tattoo running around his right bicep. “I was at a pharmaceutical conference in Dallas and bored out of my head. I’d split up from my missus and went downtown and had my kids’ initials done, JLD, for Joseph, Luke and Daniel. Then I got back with my wife so I had her initials added during the Edinburgh Fringe Festival – after I’d waited a few years to see if the marriage would work!”

Things do not always go to plan with Bishop. When he performed in front of a sell-out 16,000 crowd at London’s O2 Arena earlier this year at the C4 Comedy Gala, he only decided what he would talk about onstage a few minutes before going on. “When I found out I was being introduced by James Corden I went on and talked about how I went to the Brits party with him and Freddie Flintoff and met Robbie Williams. And then in the morning our picture was in the papers and one of them had the caption, ‘James Corden with Bez from The Happy Mondays’”

Bishop is not likely to be mistaken for Bez any longer. He is now a familiar television face, having been a regular panellist on Sky’s sports quiz, A League of Their Own. But, it turns out, Bishop is not a big fan of panel games. “I like A League… but a lot of them are overcooked. You have to spend four hours filming a thirty-minute programme. That seems mental to me. I’d like to see a live panel show on television.”

Building up a loyal live following comes first. The other problem about appearing on television is that it eats up material. “I won’t do routines at gigs that I’ve done on television. I’m essentially a storyteller not a joketeller, so I have to keep coming up with new stories. To me comedy is like being a magician, once they know the rabbit is coming out of the hat they won’t care. I want people to keep coming to see me and not think there is no point because I’ve already said it all on telly.”

Fortunately he has plenty of old material from his pre-fame days to update. He is also constantly inspired by his family. His Elvis show boasts a classic routine that every father of teenage sons will recognise – the moment when they realise their son could beat them in a fight. Bishop realised this when he had a heated argument with his oldest son who he saw wearing his trainers. Bishop brilliantly found the funny side, reflecting on the thought of being thumped by someone who was wearing his own footwear.

Being more mature than a lot of comedians Bishop has an interesting past to draw on. After studying politics at Manchester Polytechnic he cycled around the world, was a midfielder for Hyde United and did some soccer coaching in America, but returned because he had problems with women. “They couldn’t understand my accent. They thought I was Hungarian.” He puts his treacle thick brogue down to the fact that when he was ten his family moved to Runcorn, where kids tried to “out-Scouse” each other to remind people where they came from. Eventually he “blagged” his way into the pharmaceutical business pretending he had the right A levels and ended up with a company car and all the trappings, but he was unhappy. That talent night in 2000 changed everything.

Comedy for Bishop is a dream come true, but it also helped him to fulfill another ambition. In 2009 he pulled on the famous red shirt and appeared alongside his Anfield heroes at a Hillsborough benefit. He even made a few decent passes. So would he swap his comedy success for a professional football career? It is the only time during the interview that he has to pause before answering. “I’d swap all the telly, but there are very few things I would swap for being onstage. I love the feedback from an audience and I love the feeling of being a one-man gunslinger. If I could have been Steven Gerrard that’s different but to be in the Third Division maybe not.”

As a successful salesman does he see any similarities between selling medicine and selling the best medicine of all, laughter? “Being a good communicator helps in both areas. There’s an element of treating an audience as if they are individuals. I’m absolutely bowled over by the people I meet who have made an effort to come. People who have done a four-hour round trip. I’ve got relatives who wouldn’t come to our house for tea if it took four hours. But I think the only real transferable skill is my work ethic. And that comes from being skint as a kid. I made my first £100 when I was 13 selling teddy bears door to door.”

While touring is his priority, Bishop has also dipped his toes into the acting world. He played a parent in C4 drama Skins and flew out to Jordan last year to appear in the forthcoming Ken Loach film, Route Irish, which explores the Iraq conflict. “I’m one of the three main people, I’m not trained as an actor, but as long as the part is for someone who looks and sounds like me I’ll give it a go.”

He is glad that he made it in his forties rather than his twenties. Having a family keeps him grounded and providing for them is a great motivator. “I’d like to see more of them, but doing these big tours means that when my son wanted to see Lady Gaga I was able to contact the venue and because I’d played there they gave me some tickets.” He lets out that laid-back Liverpudlian laugh. “I think that meant more to my son than having his dad at home!”