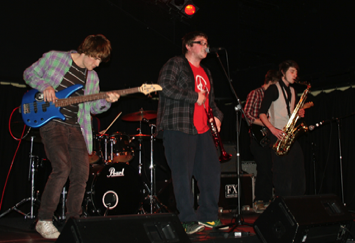 Largo Embargo beat the best in the South West to book their place at this year’s Glastonbury Festival. As the winners of the 2011 Live and Unsigned Competition the big beat ska/reggae fusion group will perform on the BBC Introducing stage at the world famous event. The five piece band, with members from Bath and Bristol, won over both the judges at the crowd at the live final today held at Bristol’s Colston Hall. The sell out show featured young artists from across Avon and Somerset who were chosen by the panels at the district heats. In second place was soloist Dominic Malin, a Bristol Institute of Music student, who won a day at a recording studio (247 Magazine introduced Malin at a BIMM showcase at Metropolis earlier this year and pin-pointed him as a rising star of the future). Winning third prize was Weston-super-Mare band Nine Lights who took away iTunes vouchers. The competition was sponsored by Stage Electrics, Real World Studios, REMIX, the Colston Hall and John Lewis. It was judged by Mijanou Blech – Head of Education and the REMIX programme at the Colston Hall, Alex Lupo – drummer and percussionist with Babyhead, Chief Constable Colin Port and last year’s winners Two in a Boat.

Largo Embargo front-man Jake Williams, 19, said: “I’m buzzing. I’m really excited to be going to Glasrtonbury. There were a lot of good bands and the competition was fierce so we are surprised and chuffed to bits.” Saxophonist James Moss, 18, said: “It’s phenomenal and an amazing feeling. I couldn’t be happier and we are over the moon to win.” Matt Hollaway, a member of Chipping Sodbury band Area 51 said: “We have really enjoyed taking part in the competition. It was the best stage ever – the lights and sound was perfect and we had a lot of support from the crowd.” Ollie King-Britton from Yeovil metal band Undertryyke said: “It was unreal, words cannot describe it really. The crowd were amazing and we really enjoyed it out there.” Chief Constable Colin Port said: “The standard this year was incredible and big congratulations to every band that took part. I am enormously grateful to those who organised the event and our sponsors without whom it would not have been possible.