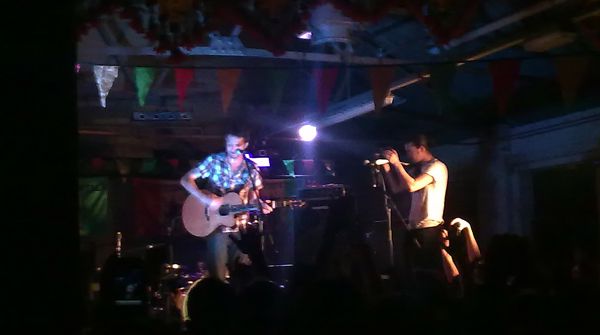 You’ve got to be sceptical about a gig in a car park. It could all too easily proved utter crap. I mean, car park’s weren’t built for their awesome sound, they were built to, well, hold cars. Thankfully this one, tucked away in the middle of Shoreditch, was decked out in true Strummerville style – with flags, sofas, buses, portable toilets etc etc. Doors opened at 8pm with punters looking defiantly at the end time on the poster…6am. Although it was sold out, it didn’t have that sea full of sardines feel that say Glastonbury does. There was plenty of space to move between the two makeshift stages (and bars).

Thankfully, the painfully pretentious Hackney Hipsters steered well clear of this one off event, the crowd made up of young hapless half hipsters. The bands mingled with their fans and watched their fellow artists perform, like some Jools Holland love in. But the night was really all about Frank Turner, for this was his 1,000th gig ever. And what a gig. If you didn’t know the words to his songs, you were in the minority. This felt like one of those gigs, you’ll look back on in 10 years and say ‘I was there’. The good vibes acted as a catalyst for Turner’s angsty folk rock and saw him put in one hell of a performance. He played a fair chunk off his awesome 2008 album Love, Ire and Song album, including the compelling singalong, The Road, and the heartbreaking yet hope-filled ballad Long Live The Queen, written about his friend Lex, after she died. But it was the iconic Photosynthesis which really nailed this as one of those sought after ‘moments’ in life with hundreds of people yelling “I won’t sit down and I won’t shut up, but most of all I will not grow up.”

Turner is obviously a massive music fan (stating the bloomin obvious I know!) and he often throws in a cover of something divine, from Bruce Springsteen’s Thunder Road to Ryan Adam’s Sweet Carolina and Counting Crow’s Rain King to Queen’s I Want To Break Free it is flattery in it’s best form, imitation. It also reiterates how rich Turner’s musical roots are (not literally, even though he did go to Eton – on a scholarship mind). So the crowd was waiting with bated breath for another original cover…don’t think anyone expected an olde English folk song about a King but that’s what we got. It wasn’t bad, but Turner’s gift is quantifying just how we’re all; feeling in his lyrics and it was the wonderfully insightful, if not slightly obvious, Substitute which made the guys in the audience go crazy, where he muses ‘Well I’ve had many different girls inside my bed, but only one or two inside my head.’

I’ve seen Mr Turner half a dozen times now and something special always happens when he takes to the stage. Whether it’s because we can all see a little bit of yourself in him, whether it’s cos he’s just an all round sound guy or whether it’s because his punk-fuelled defiant anthems make a beeline for the depths of our souls and give us lessons in life and love I cannot say. But whatever it is (prob all three elements) it’s fine by me, me and all the other Frank Turner fans who continue to help turn his gigs into a massive, yet touchingly intimate, singalong.

Other acts who captured the imagination at this awesome Strummerville Spring Sessions party were The Joker And The Thief and The Welcome Committee. The One Love Soundsystem took the party into the early hours, where the hardcore crowd who survived past 3am started to look like the walking dead. The sense of achievement fart outweighed the shame though and made for a thoroughly epic night. We were less than impressed with the £4 a can drinks mind you. Guess you can’t have it all.