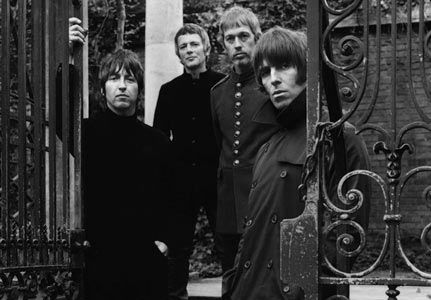 A sell out 2,000 capacity venue awaits one of Britain’s most iconic front men,the former wildman of rock Liam Gallagher. While, Gallagher has swapped wild partying for early morning school runs, the rapid speed at which tickets for this gig sold out proves that his rock and roll credentials are still intact. Liam and his former Oasis band mates have downsized since they last made the trip to Wales, entertaining the masses at Cardiff Millennium Stadium, but the departure of older brother Noel has opened up a new avenue for Liam and the rest of his Oasis band mates.

The forming of Beady Eye proves that there is a passion left in the remainder of Oasis and that Liam and the lads are more than capable of creating great rock and roll tunes. As this evening’s crowd await, they settle into the half-seating half-standing venue and the majority of fans are overzealous and surge to the front, no doubt to soak up the electric supercharged atmosphere. The crowd give a great Welsh welcome to the band ,though their favourite is soon singled out to the chants of “Liam, Liam”. The showman arrives, swaggering up to the microphone to introduce his band and the first song of the evening, “Four Letter Word” the first song on their debut album, Different Gear Still Speeding. The response of the pumped up crowd sends the atmosphere to another level as they bob and sway with every lyric and note. The theme of tonight is set, a fully charged rock and roll night to remember.

As the band only have one album to offer, Beady Eye couldn’t give the crowd the duration they craved, though the quality was undeniable. They breezed through the tunes, which include,”The Roller” and “Bring The Light” – a great sixties piano driven tune with the a distinctive Jerry Lee Lewis feel to it. Next up was new single “Millionaire” a melodic tune and one of the catchiest songs of the night. Though it is the Beatle-esque acoustic song “For Anyone”, which proves that Liam has moved out of big brother Noel’s shadow and honed his own song writing skills, a simple though somewhat spiritual composition which fitted perfectly into this evenings arrangement of songs.

So for the fortunate few who managed to beg, borrow or blag a ticket for tonight show, they should feel privileged to have seen such an important segment of the band that was Oasis. To see them at such a small-scale venue is always a bonus to any gig-goer and as the festival season awaits Beady Eye after this short but successful tour, will we ever get the chance to see them in a small-scale venue again?