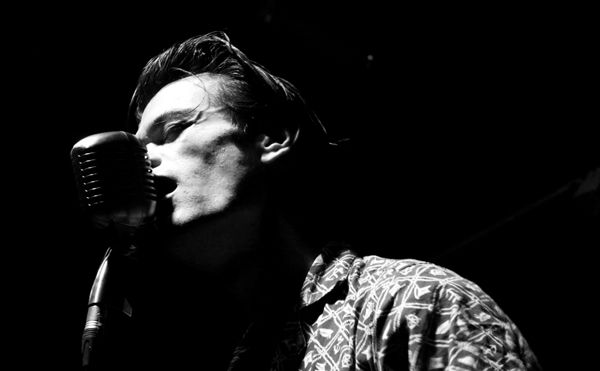 It is almost a year since Dan Sartain played Bristol. The last time was to a packed out Fleece at the end of Dot to Dot Festival, so when I saw he was playing the Thekla I assumed it would be a standard bottom deck of the boat affair – but it wasn’t. You may not yet know, but the Thekla has started using the top deck by the bar for a series of more intimate gigs and that is exactly what this was. You know when you turn up to a comedy gig late and end up red-faced as you wryly shuffle to your seat, well this was a bit like that.

We arrived during the first support act, The Computers’ set. They weren’t confined to the corner stage but they’d adopted half the top deck as their canvas so we were basically walking across the stage to get to a suitably dark anonymous space. While this may have phased us slightly, it didn’t stop The Computers from rocking out at volume 11. Dressed in crisp white two pieces the troupe of Devon rockers won the crowd over with their raucous, uncomplicated rock’n’roll with the new single, Music Is Dead, proving a bit of an anthem. With the style and stage presence of The Hives, the energy of Queens of the Stone Age and the compelling tunes of say Elvis’ faster material these guys ooze rock’n’roll. We didn’t need them to play guitar from the merch stall. the seats and the bar – creating a 360 gig experience, but that’s exactly what they did. Definitely ones to watch for 2011 and beyond.

So, after catching our breath out back we headed back in for the main draw, Dan Sartain. Sartain is one of those artists you simply can’t put in a box. There are so many strands to this guys talents and in just one short gig he managed to showcase them all. First we have tender Dan, where he reveals a Johnny Cash esque vulnerability in his lush cover of Blue Prairie by Sons of the Pioneers. Next up we got angry Dan, like a Murder Ballad era Nick Cave, spitting angst during the highly charged I Wanna Join The Army. Finally, we got stylish Dan, effortlessly portraying that Joey Ramone cool while singing the awesome Atheist Funeral. A man of many, many talents. If you listen to him, it’s down to the mind altering substances – which he confesses he’ll swap for merchandise. But I’m sceptical.

His new single Fuck Friday proves the perfect antidote to that godawful Rebecca Black song receiving far too much airplay in recent months – a short sharp punk number which kicks you in the face like an athletic donkey bolting from the stable. Bang. “Fuck Friday, Fuck Saturday, Fuck Sunday, Fuck You!” Sadly, there ain’t much info out there in the worldwide interweb on Mr Sartain, which is a bit of a travesty considering his talent but if you want a taster, check out his video for Replacement Man on Youtube. Sweet as.