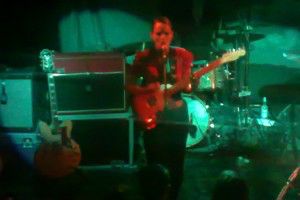 Anna Calvi left scores of fans disappointed when she cancelled her gig at Bristol Cooler earlier this year, but we didn’t have to wait long to see her as she returned as part of this relatively low key NME Radar tour. Grouplove on the other hand, have played Bristol before and won a whole new troupe of fans after a storming set at Start The Bus a few months back. And they did not fail to pull in another hoard of fans this time round.

Grouplove are undeniably American. They are effortlessly cool and gel together with the fervour and professionalism of all the massive US bands in recent years – think Kings of Leon/Killers etc. With the stage presence and massive foot stomping sound of Arcade Fire they have no trouble filling a venue like the Thekla. The compulsory smiles on the faces of the band are mirrored on the awestruck faces of the crowd, especially during their final song and most well known number Colours. Christian Zucconi’s vocals sit somewhere between Mercury Rev and White Stripes and are complimented perfectly by the hypnotising Hannah Hooper. If there’s one criticism, it’s that the set was disappointingly short but then these guys are pretty new to the scene and only have one EP of material, truly awesome material. The lyrics mirror that summer Beach Boys-esque vibe perfectly, particularly on Naked Kids where they chant: “It’s summertime fun, relax and stay young.”

In contrast, Anna Calvi was a million times more serious. Coming on stage in a high couture outfit, hair swept to the side like Mena Suvari she launched into what can only be described as an over indulgent staid guitar solo. The whirry lonesome sounds and whimsical looks were on a par with those wanky guitar solos executed by every Axl Rose wannabe in their bedroom. There’s a thin line between theatrical and pretentious and feared that Calvi would be sat on the wrong side of this. Thankfully, things picked up when she showcased some of the most sporadic yet impressive vocals I’ve heard in a while. Her more reserved notes had a slight PJ Harvey element to them, while the booming notes would have made even Scott Walker a little envious. This was none the more evident than in her cover of Edith Piaf’s Jezebel, which she ended the show on with the most spine tingling and final note. It certainly won us over. She played a lot of material of her recent self-titled album, bringing it to life so much more than an iPod ever couls, including the wonderful Suzanne, I’ll Be Your Man and Love Won’t Be Leaving. Keeping with the classically trained vocals, she did a cover of Elvis’s Surrender which she took and made her own.

While there was a permanent furrowed brow and a lot of gurning going down, you know where singers move their mouth far more than you think is necessary, Anna Calvi was still mesmerising as she did her thing on stage. Joined by a male drummer/vocalist and an uber talented female pecussionist and for one song another guitarist (Calvi was nursing an injured wrist apparently) the sound was as large as that of Grouplove and while the Thekla helped forge that intimate, impressive vibe you couldn’t help but want to hear it in a half empty church or grand hall. Maybe she’ll head back to St George’s in Bristol next time…