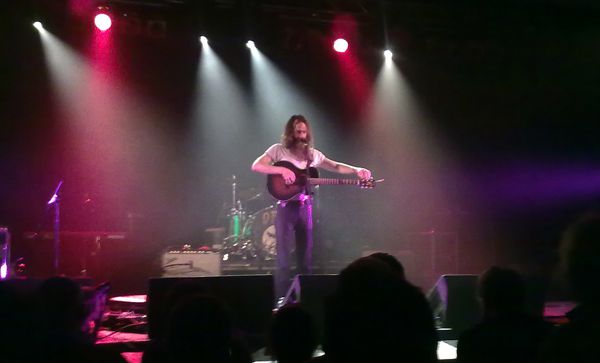 Josh T Pearson entered the stage, looking thin and withdrawn with his massive beard bristling with with age, creating an eye catching and brooding presence. The place falls silent in anticipation for what proved to be a sparse, yet emotionally fraught set. He showcased songs from Last of The Country Gentleman, his first proper album since Lift To Experience – but with each track lasting around 8-10 minutes he only had time for four songs – including Sorry With Song and Woman When I’ve Raised Hell. While he may not have released much recorded material over the past decade, Josh has been hitting the touring circuit hard and thoroughly deserves his reputation of being an encapturing and intense performer. The last time he played in Bristol was at Mothers Ruin when it was called the Box, i remember he spent most of the show screaming at people with feedback and climbing all over the tables and chairs. This time round he managed to sum up the feelings of abject loneliness and desolation. He introduces himself with the warning that there wont be any jokes tonight due to him only getting an hour and a half sleep. “My name is Josh T Pearson,” he says, adding: “T is for Texas. He then launches head first into the heart shattering ‘Sweetheart, I Aint Your Christ’, bringing tears from the black rings around his eyes, his voice whirrs with the sound of a broken man. It was like watching Nick Cave playing acoustic, using his immense stature to dwarf the room, making everyone feel that something very special was happening here tonight. This made him a very hard act to follow.

Drive By Truckers are a band that don’t really stray to far off of the tracks of southern comfort style country rock, slapping and pasting every classic southern rock sound together. Sounding a bit like a grand homage to Neil Young’s Heart of Gold as there were a number of times where I swear they nicked the exactly the same intro riff, but just pumped it up to 11. The rhythmic guitars and shared vocal performances were American through and through, with the best vocals coming from Mike Cooley, who sounded like a cross between Ryan Adams and Josh Ritter. Drive By Truckers were the first proper post Lynard Skynard southern rock band from the US and have gone on to influence a number of bands, including the Hold Steady and Gaslight Anthem. They rattle through the opening numbers before breaking into slightly cheesy country territory, with full on slap twanging lap steel guitar, singing songs of sweet home. They never really break out of their stride during their slick, streamed set – a complete opposite from Josh T Pearson’s set. Here, everything is was pumped up to the max and sounded almost a bit stilted. To be fair, Drive by truckers do put on a good solid show, but it just at times lacked a bit of charisma, everything you could see was scripted. With no shame, they wore their influences (Neil Young & Tom Petty) on their sleeves, playing a fair mixture of fan favourites and new songs which more often than not was a tad cheesy though all in all it was a good show for a hoe down.