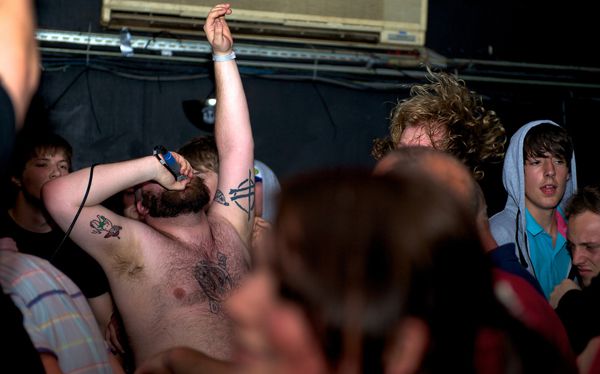 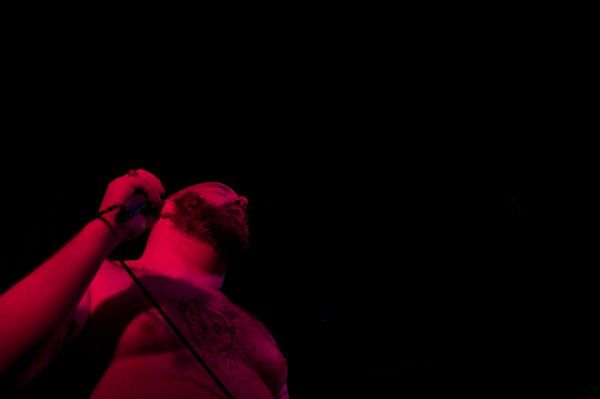 As the band made their last sound-checks on stage the crowd seem very mellow for The Croft on a Saturday night, then at 11pm suddenly the crowd came alive. Lead singer Damian Abraham, or Pink Eyes as he is known, arrived on stage and burst the room into life with his energy and vigour.

Fucked Up were on the second date of their European tour, which kicked off in Plymouth the previous day. This already being the third stop after playing a matinee show earlier in the day at Clwb Ifor Bach, Cardiff, despite this there is definitely no lack of stamina here tonight. The venue is nowhere near rammed, and I couldn’t help but wonder how the night might of differed if this had been a packed out show. In honesty I’m glad it wasn’t as once the set kicked off this rather small venue feels full to capacity, a few seconds into the first song people are getting flung from the floor towards the walls with the faint hearted backing up against the walls trying to escape the cyclone pit that was filling the floor.

Clearly not embarrassed of his rotund midriff, Pink Eyes stripped off his shirt after the first song concluded. Damian was out amongst the crowd when the second song launched, with one guys trousers already around his ankles from the ensuing riot. Damian’s on stage presence is unexpectedly personable as he converses on stage he talks as though coming back to play Bristol again is like visiting old friends, “traffic last time was terrible”, apologising for not visiting back in October when the headline tour on which they were due to support Against Me! was cancelled. He went on to explain how he hurt his back, and showed us the stitches on his forehead, but “I’ve never felt better!” he exclaimed. This may be somewhat to do with the fact he’s on a high tonight, “just smoked the last of my weed”. He also jested, “i’m not as fit as last time round, i know what you’re thinking – it looks like you’ve lost weight – well i haven’t!”

Despite the somewhat terrifying persona of Damian whilst roaring down the mic and almost strangling himself amongst the tangle of extensive cable trailing from the stage, he paused to have have his photo taken with members of the crowd showing a somewhat softer more lovable side. Being placed right next to the amp with Damien’s blaring vocals is enough to make ones ears feel like they are bleeding, knowing that the minimum after effect of this show will be bruises and ringing ears. This hardcore band from Toronto, Ontario know how to put on a show.