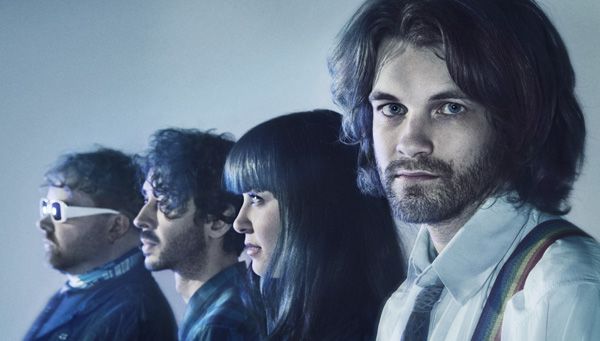 As they prepare to play this year’s Dot to Dot festival in Bristol, we caught up with Guillemots frontman Fyfe Dangerfield for a quick chat.

Your name relates to seabirds but you come from Birmingham…how did that come about?
We needed a name and I like birds.

You announced details of the new album, Walk The River, on Twitter…how important do you think Twitter and Facebook are for musicians nowadays?
I think they can be a really useful way of communicating to people. But it’s like all elements of the internet. The way things can be global in an instant is beautiful in its simplicity, but the flipside is that people come to expect more and more on an instant level. I think the internet has probably shortened people’s attention spans an awful lot. And if you have a constant presence online you lose a lot of mystique, too. So my relationship with things like Twitter is mixed, I like using it now and then but I’m very conscious of needing to maintain a distance from it too.

The new album has been getting plenty of positive press – where and when did you record it? And did you expect such a good response?
We recorded for the first few weeks in a beautiful studio in Wales, in the middle of a forest, surrounded by mountains. It was really really inspiring. And then we did the rest on a boring industrial estate, but the atmosphere of the Welsh sessions permeated the whole thing. When it comes to response, I try not to think about it too much. And I’m more bothered about what “ordinary” people think rather than critics anyway, as I think the nature of music journalism is that there has to be a context in which your work is placed, and that’s not really the truest way to listen to music. I think it’s unavoidable – it’s not really the fault of music critics, press would be very boring if everything was just reported with no opinion. But I do feel that the majority of reviews (though not all), whether glowing or dismissive, come to things from the same sort of angle as you would an essay at school, and really music and all the art forms need to be digested in a much more subconscious way. But we’ve had some really lovely comments on the album from people at gigs, and people seem to be singing along to the new songs already, so that’s been great.

We heard that tickets to a couple of your recent gigs sold out within minutes, how important is playing live to you?
Really vital, it’s how we get our music across to people a lot of the time. Often people will see us live and that’ll be what leads them to our records. And the energy of a live gig is a really magical thing when it’s right. We’ve been lucky in all the shows for this album so far, the audiences have been exceptionally attentive and encouraging to us, and that just helps you give loads back.

We interviewed electro DJ Paul Van Dyk last year and he said that your solo song Faster Than The Setting Sun was the best record of the past decade, what songs do you reckon could clinch that title?
Did he say that?! I don’t quite know what to say to that! I think you have to take any accolades like that with a pinch of salt. But one song that I heard a year or so ago and instantly went into one of my favourite songs of all time was “Dinah & The Beautiful Blue” by Thomas Feiner. It’s ghosty beautiful.

We you on your solo tour, how does it feel to be back with your band and how does life on the road compare when you’re flying solo to when you’re with your band? And what else have the rest of the band been up to?
In a lot of ways it’s all the same to me, it’s all music. But obviously it’s lovely hanging around with the band, and the chemistry between us when we play is something I’ll probably never have in quite the same way with other people. It’s been great though, yeah. But we didn’t stop playing for more than a few months anyway. By April 2009 we were writing together again every week. My record was largely done in 5 days, and we always planned to have a few months off after our second album. But we just wanted a long time to hide away and play and write without rushing our first few ideas onto a record.

You’re playing Dot to Dot festival this month – have you been to Dot to Dot before? If so tell us about that. If not, what do you think about city festivals?
I haven’t, no. But it should be fun. City festivals can be a bit hectic but that’s part of the fun. Dot to Dot seems like a great event and definitely one of the ones we are most excited about playing.

On the subject of festivals – have you got any others lined up this Summer?
Yeah, various bits and pieces. We’re doing one called Wilderness which should be fun, with bands like Mercury Rev.

We always get quite excited about the Eden Sessions, you played there a few years back, was that the most unusual place you’ve played? And what did you think of it?
It was certainly an amazing place to play. I think when it comes to outdoor gigs though, Somerset House in London was the best one for us.

What does the future hold for Guillemots?
Lots of love, I hope. And a lot of excitement. We feel so renewed and energised creatively at the moment, this album just feels like the start for us. We’re already making plans to get in a studio again and put down some more ideas. It feels good.

Guillemots join the likes of Hurts, The Naked and Famous, And You Will Know Us By Trail Of Dead, The Joy Formidable, We Are Scientists, Ben Howard and Ed Sheeran at Dot to Dot, Bristol, from 1pm until 4am on Saturday May 28. Wristbands, which get you entry into all the Dot to Dot venues, cost £30+bf More info HERE.