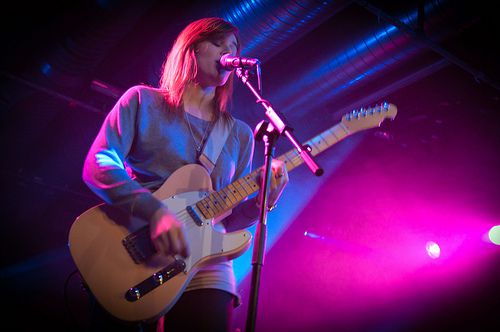 It’s almost a year to the day since Best Coast last played in Bristol and the change is clear to see; they got popular. Last time the touring three-piece played to a barely half-full 100 capacity Louisiana. This year they play to a completely sold out Thekla, capacity around 350 and tickets costing a fairly steep £12.50. You’d think this might put a smile on Bethany Consentino’s face. After all, she fronts a successful band, touring on the end of a both-critically and commercially successful album, playing to sold out crowds night after night. Well, you’d be wrong. Kind of.

First up, though, is local band Parrington Jackson. Although it was always going to be difficult to fill such esteemed boots (Spectrals who’ve joined Best Coast for the rest of the tour couldn’t make it to Bristol due to playing the Camden Crawl) the Bristol five-piece are some way off. The middle of the road indie at times reaches out to Manic Street Preachers-influenced rockier sounds to un-inventive, uninspiring and fairly drab effect – although the crowd seem to like it, so good on them.

Perhaps we’ve been harsh on Bethany. She’s away from home (and not to mention her infamous cat, boyfriend and illegal habit), towards the end of a long tour in a city with no-one she knows, so to start a set a little bit grumpy is understandable. But that’s kind of the thing with being a touring musician, isn’t it? And Bristol fans, of which there seem to be plenty in number and of many shapes and sizes, probably have the right to feel a bit aggrieved that they get a below par performance because of how dates happen to have fallen.

In fairness, after a first few tracks lacking energy and enthusiasm coupled with between-song grimaces, swigs of energy drink, and a clearly worn voice, Bethany picks up and starts to finally enjoy herself – the set saved from too much damage mostly thanks to the outright strength of the songs on show. ‘Boyfriend’ has considerably more oomph, its more pacey and joyful feel bringing the crowd to their toes, and Bethany seems lifted even more by some iPhone app-led crowd conversation – her change in mood alone bringing about a steep incline in performance immediately. A few new songs – not straying too far from Crazy For You’s musical territory – go down well, and the band’s more upbeat tracks even more so to end the set on a satisfyingly noisy and ultimately positive tone, but you can’t help but think it could have been so much better could Bethany at least pretend to be enjoying herself a little more.