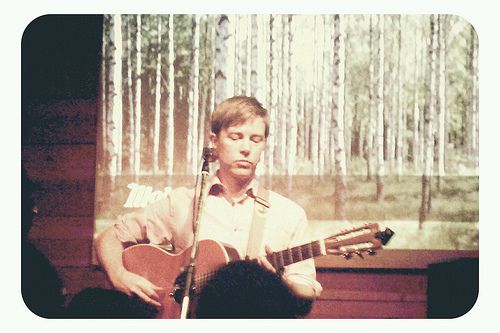 Despite being flanked by two impeccable musicians, Bill Callahan cut a lone figure on the stage of one of Bristol’s most underrated venues, the Trinity Centre. As unassuming man whose age is very hard to pin down, his weathered face and dramatic expressions portray a man who has lived, yet his fitted suit and clean cut appearance suggest he is a youthful force to be reckoned with (though Google tells me he is in his mid 40s). I first saw Bill play Bristol Thekla a couple of years ago and the DHP group clearly knew they were on to a good thing with this cult musician so thankfully brought him back to play the Trinity Centre.

He’s left behind his relatively upbeat Smog days and now executes a two-hour set of heart wrenching, stark ballads. Though he did include a few Smog favourites, including The Well, a rhythmic folk-style slow burner, centred around the tale of one man’s day at a well. Simply divine. Hell, any song with the word ‘Dang’ in it is fine by me. Other Smog additions included Let Me See The Colts and Say Valley Maker, which contains some of his most excellent lyrics: ‘put me in wood and I will splinter, bury me in stone and I will quake’. He also included some of his older solo material, Eid Mia Clack Shaw with the poignant, brilliantly repetitive lyric ‘show me the way to shape a memory’ and Too Many Birds, where he muses ‘you fly all night to sleep on stone’. Think the guy is obsessed with stone.

His new album, Apocalypse features heavily in this set with Drover, Free and Riding From The Sea oozing with charm. It was the most well-known track off the album, Baby’s Breath, which aroused the biggest crowd reaction. Callahan effortlessly taking us on an intimate journey through a subdued love song, like a brighter Nick Cave singing of flowers and weeds rather than roses and rocks. The distinctive America! (also from Apocalypse) showcased Callahan’s more witty side, though it was hard to tell whether his harmonica hidden grins were amusement or just another way to help carve the spellbinding sounds which come out of his mouth. To start with, the song sounds like a bit of a tribute to Allen Ginsberg’s America, but Callahan goes on to namecheck some modern icons, including David Letterman, Captain Kristofferson and Sergeant Cash ending with some of the most vivid imagery I’ve heard on any of his songs, ‘All the lucky suckle teat, Others chaw pig knuckle meat, Ain’t enough teat, ain’t enough teat, ain’t enough teat.’

But for me, it was his most compelling, beautiful rendition of Bathysphere which stole the show. His execution of the oh, oh, oh, oh, oh, oh, complimenting the tear jerking lyrics and slow burning guitar and drums perfectly. Together with the crystal clear sound quality at the Trinity Centre and the receptiveness of the crowd made this one of ‘those moments’ to remember forever. And that’s not overstating the power of Bill Callahan’s performance here. In case you hadn’t gathered, Callahan is an all round lyrical genius. A poet with a voice to melt a million hearts. OK, so he looked pretty detached at times, but a bit of banter with drummer Neal Morgan showcased his down to earth side. You see it’s all too easy to put Callahan on a giant pedestal. The only criticism is that we didn’t get Cold Blooded Old Times or the truly awesome cover of Kath Bloom’s The Breeze which he treated us to last time, but hey that’s just being greedy right?