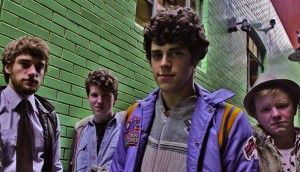 Noah and the Whale seem to provoke mixed opinions, as i found out when discussing it with a few friends. However, after a very limited investigation it became clear that it all depends which of the hugely different albums you have listened to. Whilst some hate the pop-tastic catchiness of tunes from the debut album. tunes like ‘5 Years Time’ others weren’t impressed with the poetic melancholy of second album, ‘The First Days of Spring’. The divisions are so clear that lead singer Charlie Fink could split the set up into the fast section and the slower more romantic bit. Thankfully they were all brilliant. With a smattering of new songs from their third album, Last Night on Earth, including a rousing rendition of the single L.I.F.E.G.O.E.S.O.N. the energy never waned as they bounced around and sang with passion and gusto (a word that is not used enough nowadays) in a gig that included personal favourites of mine such as Rocks and Daggers and Shape of My heart. The heart strings were also suitably tugged with the much slower I Have Nothing and uplifting Love of an Orchestra. This is the second time I have seen them (and indeed the second time they’ve played Bristol this year) and I will be there for a third outing when they return. Come back soon!