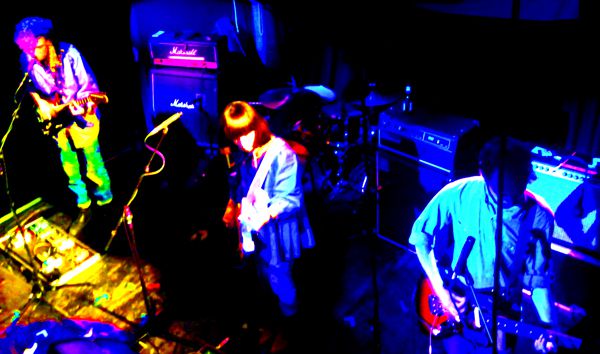 Cajun Dance Party sucked. They made bad pop indie, and did it badly. Former members Daniel Blumberg and Max Bloom evidently had some sort epiphany to that effect in 2009, possibly while listening to a Dinosaur Jr. album, and decided to sack off their terrible band. Henceforth they created Yuck, better music was born and the world was thankful. The two Londonites, seeking a cosmopolitan workforce, recruited enigmatic Mariko Doi from Japan on bass and Zangeif-from-Street-Fighter-with-an-afro Jonny Rogoff from New Jersey on drums. Together they have been doing their damnedest to make grungey dissonant distortion be heard across the globe, and their self-titled debut album released in February of this year has garnered a wide swath of critical acclaim.

Taking the stage tonight they cut an interesting picture; Blumberg is achingly cool and introverted, barely registering that he appears to be on a stage and in front of a crowd, while Doi looks pretty pissed off to be there. Maybe she had other plans.
Whoever is doing the sound tonight has done one hell of a good job. Much of Yuck’s sound is predicated on their understated vocals being somehow slightly lost in the waves of reverbing rhythm guitar, counterpointed with a fairly clean lead over the top. Thekla’s metal walls (or should I say hull?) has a tendency to add an extra degree of reverb that can throw a set off, but not this evening.

The band work through most of their album without a word. The Sonic Youthalike ‘Operation’ is one of the highlights of the performance, but during their slower numbers like ‘Suck’ the audience’s attention seems to wane a little. Overall their performance is pretty tight, but might benefit from a bit of grungey angst to add energy to the room. Blumberg stops briefly between songs to enthuse about Falafel King (he reckons it’s great; it’s not) and namecheck the inevitable Big Jeff, and in about 45 minutes it’s all over. The rest of the band leave the stage while Blumberg plays around with some feedback and one of his many pedals, and then he too is off. Perhaps they did have other plans after all.