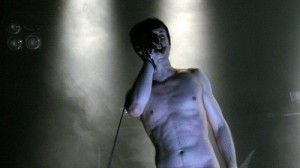 Foe take to the stage tonight, looking like a bunch of uber cool kids with a sludgy lofi take on 90s groups like Queen Adreena and Daisy Chainsaw. Next up were Necro Deathmort, a two-piece that some how managed to combine doom metal and slow hollowed-out Dubstep. I know what you are thinking? How the hell would that sound? Well it sounded pretty effortless, as they moved from droning guitars, like Pelican, through to Burials’ almost glacial dubstep to create what is effectively an off peaked, almost paganized soundtrack, that effortlessly floats through an atmospheric, architectural landscape of sound. Now, if Necro Deathmort were the musical equivalent of building a landscape with a big beautiful machine, then Atari Teenage Riot are the sonic equivalent of a hard punch in the guts or a constant nail bomb to the face.

I remember the first time I saw ATR, at Reading festival 99 when i was only 15, they opened up the main stage on the Saturday at 11 am, I was half way back in the field they were bone-rattling loud and terrifying. They had me quaking in my pants! But would they still have the same effect on me? Hell yes. As a band, Atari Teenage Riot have never done things by halfs, always pushing the boundaries, speaking openly about such issues as racism and economic turmoil. Their sound has paved the way for a whole wave of acts, from the Prodigy to Crystal Castles. In fact, they pretty much single-handedly invented a new genre of music called Gabba.

It is clear from the offset that they mean busyness and they set about slaying the Fleece at a blistering pace. They are the sound of a revolution with such intensity that they instantly rip the crowd into hybrid fervour. They rattle through a blistering back catalogue and fresh tracks from their new album ‘Is this Hyperreal?’, which prove a full on attack on the senses. This band are not prepared to water themselves down and each song lands like bomb blast on a 90 mile an hour thrill ride. Alec Empire works the crowd to the max, waving for more noise. As per usual there were the no holds barred rants on politics and racism. And MC Kidtronik fitted in perfectly well within the ATR set-up, replacing the late Carl Crack, who died after a long battle with drug addiction.

It is fair to say this is not a band for the faint hearted as their shows have had a history of violence. Along with the likes of Squarepusher and Aphex Twin, ATR has pushed sonic noise to the very edge. Viva Le riot.