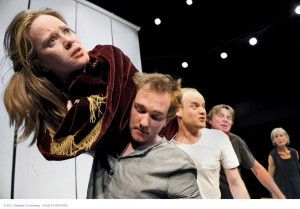 The Golden Dragon is a theatrical fable written by Roland Schimmelpfennig which is receiving its English language premiere in the Drum this month. Schimmelpfenning is widely regarded as one Europe’s most exciting dramatic voices and is currently the most performed playwright in Germany.

247 spoke to Ramin Gray the ATC Company’s artistic director to ask why he felt the time was right to bring this story to an English speaking audience.

Well the play’s been incredibly successful in Germany and, like all the best fables, it’s a very simply story but one that’s told, and performed, in a very complex way. It’s effectively a story about a very ordinary part of our day to day lives – the Chinese restaurant – but then made into something very extraordinary by incorporating more fantastic elements into the narrative of a young Chinese man coming to this county and trying to find his sister.

So the play, on its most basic level, portrays a reality that we’re all familiar with?

Yes definitely, this type of restaurant is one that we’ve all frequented and one time or another and, quite possibly, in a very unconsidered way. It’s not really somewhere that we necessarily engage with too much and particularly the not people who work there. We don’t tent to give too much thought to their situation or reality.

This play causes us to do just that then?

Yes it takes us into this world and, in various ways, challenges us to consider what it means to be someone else. This process is particularly helped by the five actors who constantly play against type. Older actors play younger characters, men play women, women play men etc etc. It all serves to keep the audience acutely aware of the performed nature of the piece. I hesitate to say the audience has to work at their reading of the play because it’s all presented for them but it constantly moves you somewhere the pulls you back and pushes you somewhere else as an audience

So it’s requires a certain level of engagement from the audience then?

Yes I suppose it does . . . but then they are rewarded for that engagement because they become part of the making. We’ve invited mystery guests into each rehearsal to see the work that’s been going on and to offer any input so the way this performance is perceived bt the audience has been at the top of our agenda throughout the process. We want them to be able to accept the characters and the stories that are being presented to them and gain a level of insight that they probably haven’t experienced before. Interestingly for a play about a Chinese restauarant, you’re not given the story on a plate but I can guarantee you’ll probably never look at a Chinese restaurant in quite the same way again

So, if you’d like to experience a night out of the ordinary, then get along to the Drum theatre where The Golden Dragon is running from 12th to 28th May 2011.