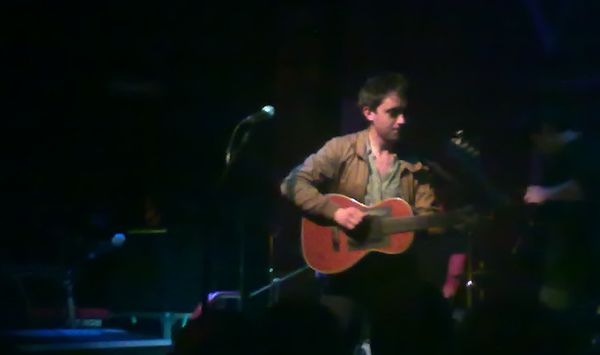 Full marks to The Trinity Centre in Bristol for providing the perfect sound to an almost perfect gig. It happened with Bill Callahan last week and now here, with Villagers, we see another infallible effort on the sound front. Granted, it helps that the musicians themselves are pretty flawless but a degree of praise has to be instilled upon the venue. And long may it continue.

Support for this gig came from Michele Stodart, of Magic Numbers fame. While the signature high-pitched, melodic Magic Numbers sound was easily identifiable in some of the songs, her set was a lot more varied and showed that she’s more than capable of hitting the road without her sibling sidekick. Stodart played a number of songs from her debut solo album, Wide Eyed Crossing, which displayed a range of influences – from the classics such as Bob Dylan to Patsy Cline and Tracy Chapman to Amy McDonald. A compelling set from an undeniably talented lady and an apt opener for Villagers.

Conor (aka Villagers) almost snuck onto the stage with nothing to hide behind other than a small guitar. He launched straight into a charming, bare version of Cecilia & Her Selfhood, with perfect annotation on every single word, you could hear a pin drop as he spoke of Cecilia and her sister, statues, stone and hammers. Spine-tinglingly stark and hauntingly beautiful. It’s hard to steer away from the comparisons to his namesake Conor, from Bright Eyes, especially during adorable songs like Twenty Seven Strangers and The Grateful Song, where the fragility in his voice sails effortlessly alongside the simple guitars and heartfelt lyrics. This continued full circle to the encore with the wonderfully austere That Day and In A Newfound Land, You Are Free.

Like all great songwriters, Conor harnesses the best of the old English folk method of telling a story with the more introspective, 21st Century trend of exposing your feelings for all and sundry. Cue The Meaning Of A Ritual, a captivating soaring song which culminates in a Pink Floyd-esque crescendo with Conor yelling: “But my love is selfish, and remembers everything, like the first time it was moved enough to sing, how it dangled on that stage just like a puppet on a string.” It was this midway addition to the set which justified the addition of the extra guitars – because until now, the extra musicians on stage seemed pretty redundant, with the exception of the keyboardist and backing vocalist. This isn’t saying anything about their musicmanship, but is more testament to Conor’s ability to command the crowd with nothing but his voice and his guitar. They also added that anthemic edge to Down Under The Sea, which harnessed the radiance of the biggest Puressence song, with the charm of Radiohead and a definite nod to some of the more legitimate U2 (and I’m not just saying that cos Villagers are Irish!).

As the perfectly planned set started to wind down, Conor showcased his darker side with I Saw The Dead, an eerie Jean Michel Jarre sounding number which would not have been out of place in that film where the little boy actually does see the dead – The Sixth Sense. Come to think of it, Conor has an air of that kid about him. No offence like. Towards the end we were treated to a newer numbers in the shape of The Bell and what was to prove the highlight of the night, Memoir, a painfully honest, touching ballad about giving yourself away and an insight into the tumultuous life of this brilliantly talented singer/songwriter. Roll on the release of the new album.