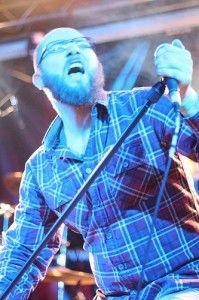 The Thekla in Bristol hosted the penultimate leg of the six-date Scuzz Friction tour – featuring with the long awaited return of Earthtone9, ably supported by The Ocean and Maybeshewill. Almost a decade since Earthtone9 went to play alternative metal at the great gig in the sky, Bristol saw drummer Simon Hutchby returning to the line-up to join the other four members who called the hiatus in 2002. Back then, Earthtone9 were battling against the nu-metal wave, but the musical landscape is very different now. An army of devoted fans packed to the front of the stage to get the full impact of the intense performance, led by the wonderfully bearded Karl Middleton. To those worried about Earthtone9’s uncertain return to the metal scene would have had those quashed by the opening riff of Evil Crawling I, which started off an assured and typically chaotic performance that proved the Nottingham natives can still cut the mustard.

Self-styled “ambient soundtrack doomrockers The Ocean brought their unique mix of progressive metal and classical sensibility to proceedings. Asking for the lights to be turned completely out and the mic volume to go as low as it can – we knew we were in for a forcefully ramshackle performance. Recent raptures from Rock Sound and Terrorizer et al are hard to argue. The Ocean’s aggressive vocals, relentless percussion and melodic guitars make for a curiously exciting outfit.

Stars of the show however were undoubtedly Maybeshewill. The Leicester four-piece brought their wonderful blend of post-rock, metal and electronica to a criminally short set. Releasing new album I was here for a moment, then I was gone this month, they would have won many new fans on the Thekla deck. The two recent singles on that album Critical Distance and To the Skies, From a Hillside were the stand-out songs of the night – across all bands. Ever-increasing crescendo from over-driven guitars and dynamic bass sit perfectly alongside melodic breakdown from piano and violin and subtle percussion. Electronic samples punctuate the closing track Co-conspirators and it is the perfect close to their set-list. On Saturday night, Maybeshewill were co-conspirators no more, they became head of the gang.