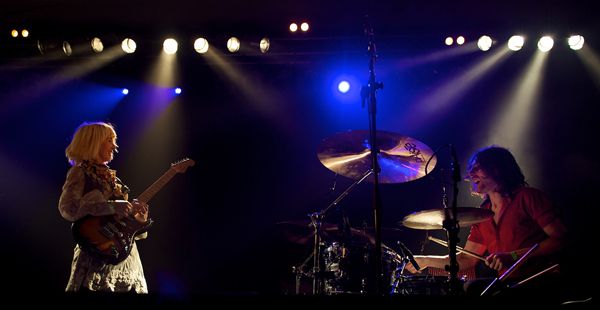 Dot to Dot is fast becoming one of the leading inner-city music festivals in Britain. Taking place over 3 days in numerous venues across Manchester, Nottingham and Bristol, the day long music festival is a platform to showcase some of the most exciting, up-and-coming new music around at the moment, with over 50 bands and DJ’s playing for a whopping 16 hours each day. Part of the joy of the festival is seeing newly signed artists and bands given the opportunity to play on the bill alongside more established acts. It is a unique experience; it is not only the timetabled scheduling of acts or the location of their performances that decide your set-list, but also other extenuating circumstances (in our case rain) that lead you to bands you might have otherwise missed.

One of the first acts we caught was Little Victories at The Louisiana. Having toured Bristol before in previous incarnation Farthing Wood, Little Victories bring their eclectic brand of folk-pop to the mix, adding a violinist and female vocalist to the line-up. The vocal harmonies of Samantha Gould and Lewis Doyle perfectly compliment one another, whilst being more than ably supported by a menagerie of merrymen, in particular Richard Jones on fiddle, who shone brightly from the back of the stage. We couldn’t help but draw comparisons between the handclappy, upbeat, Sunshine Bus tunage of Little Victories with Cardiff folksters Los Campesinos! and this seems to be a bit of a sore point for the band, given that they dedicated their whole set to their lead singer Gareth, the ‘complete dick’.

One of the more intriguing performances of the day saw 50s prom-rockers Various Cruelties play to a lucky handful of people upstairs in The Louisiana. Despite the lacklustre turnout, it was an extremely assured performance, fronted by Liam O’Donnell, a man soaked in affrontery and gusto, dressed in leather jacket and winklepickers – he really doesn’t break the front-man mould, but thankfully that’s a good thing. The simple rhythm and catchy lyrics reminded us of previous modern day advocates of 1960s psychadelic pop-rock. But is the world ready for another The Coral?

Next up was Braids at The Cooler. Altogether more alt-beat and Bjork-esque, Canadian wall-of-sounders Braids slowed things down and transfixed a knowing audience with a performance of outstanding vocal ability and post-rock sensibility. Similar to Animal Collective and Boards of Canada in spirit and musical style, they failed to overcome a seriousness that detracted from the otherwise calming offering. A heavy reliance on electronic beats and samples further distanced Braids from their generic counterparts, but it didn’t always work, sometimes sounding to the untrained ear like a record played underwater.

Continuing the lo-fi soundscape, surf-rockers Dom drew an impressive crowd given the size of the room upstairs at the Thekla at 8pm, perhaps in most part due to the media-buzz around the Massachusetts foursome of recent time. The hype seems to have credence, given that their shoegaze sentimentality and driving rhythms evoke memories of a summer atmoshpere, a barbeque with friends. Catchy lyrics coupled with falsetto delivery took us to a place nso different to the mud dock bathing not in New England sunshine, but pissing rain. It was a shame to face that depressing reality.

But one of the main draws, The Joy Formidable, proved their worth at the Anson Rooms later that night. There isn’t much we like more than a female fronted rock group. Except, that is, a good one. Ritzy Bryan characterises everything you want as the singer-guitarist of a alt-rock band – energy, pizzazz and a no bullshit attitude. Having said that, when the songs stop, she is perfectly polite, interacting with the crowd and seeming genuinely humbled by her audience’s reaction to the debut EP The Joy Formidable are showcasing that night. Having been active for 4 years, TJF seem to be finally getting a reward for their hard work and it’s not a surprise given their ability to pen very decent tracks, all with thick, textured noises and clear, shimmering pop hooks. We wanted to end the evening on a high and that is just what happened.

The thing with Dot to Dot is that the effort you make dictates what you get out of it, the more you put in, the better it will be. Be prepared to queue, after all there are some high quality acts on show, but don’t plan things too much. It’s the unpredictable path to new bands that make this festival surprising and special.